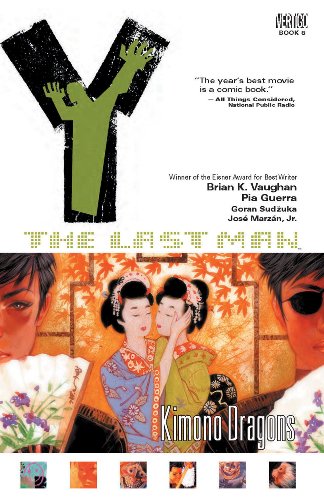 KIMONO DRAGONS brings the hunt for Ampersand—the monkey who could unlock the mystery of the male-killing plague— to its explosive climax, as the last man on Earth and his companions finally reach Japan and discover the truth behind Ampersand's abduction. Collects issues #43-48 of Brian K. Vaughan and Pia Guerra's award-winning Vertigo series.

If you're looking for a comic book that falls outside of the usual superhero fare, Y: The Last Man is one of the top choices around. A creation of Brian K. Vaughan and Pia Guerrera, it's a post-apocalyptic story in which a mysterious virus has wiped out every male on Earth, except a young man named Yorick and his monkey, Ampersand. In the eighth trade paperback, Kimono Dragons (issues 43-46), Yorick, Agent 355, Allison, and Rose are in Japan on the trail of the abducted Ampersand. Yorick and 355 find themselves mixed up with the Japanese mafia led by a former Canadian pop star named Epiphany, while Allison and Rose hope to find some answers in Allison's mother's lab. The remaining two issues (47-48) are standalone stories, "The Tin Man" and "Gehenna" (Goran Sudzuka takes over the pencils from Guerrera, with Jose Marzan Jr. still doing the inking), which explore the histories of Allison and Israeli solder Alter. Y: The Last Man is part of DC’s Vertigo line and has some mature content, including nudity and graphic violence. --David Horiuchi