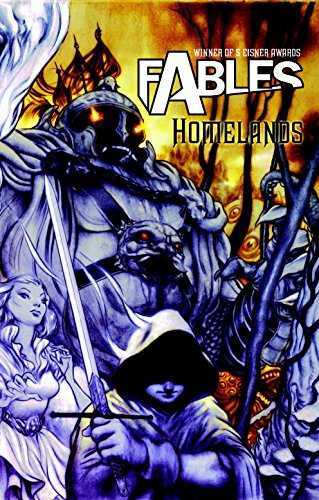 Collecting issues #34-41 of writer Bill Willingham's Eisner Award-winning creation, HOMELANDS follows Boy Blue on a mission of revenge as he uncovers the Adversary's true identity! Plus, the 2-part story of Jack's adventures in Hollywood and the one-shot story of Mowgli's return to Fabletown.

The last installment of Willingham and principal artist Mark Buckingham's saga of fairy-tale characters in exile, The Mean Sea sons (2005), seemed to tread water after the cataclysm in arch of the Wooden Soldiers (2004) and before more hurly-burly. Home lands,while it reveals the long-sought identity of the Adversary, whose forces drove the exiles out and threaten them still, consists of cloak-and-dagger stuff, however, not warfare. Before the central action resumes, the rather too rudimentarily drawn (by David Hahn) "Jack Be Nimble" follows con-man Jack (famed for his thieving beanstalk capers, among others) for some years after March 's big battle and leaves him hitching farther away. Back to the main drag. Boy Blue, invincibly armed, is in the Homelands, aimed toward the Adversary and offing evil underlings en route. In Fabletown, the sheriff, Beast (Beauty's husband), ferrets out an Adversary mole, and the mayor, Prince Charming, calls in "perpetual tourist" Mowgli to track down absconded Bigby Wolf. Blue winds up in two consecutive stews, and any final ending remains shrouded in the mists of futurity. Lucky us. Ray Olson
Copyright © American Library Association. All rights reserved

Book Description Paperback / softback. Condition: New. Buckingham, Mark (illustrator). New copy - Usually dispatched within 4 working days. The sixth volume in the series explores some of Bigby Wolf's extracurricular exploits around the mundane world in "Cinderella Libertine" and "War Stories" before returning to the main storyline in "The Year After," which follows the aftermath of the Adversary's attempt to conquer Fabletown. Rated for mature readers. Seller Inventory # B9781401205003

Shipping: US$ 13.44
From United Kingdom to U.S.A.
Destination, rates & speeds