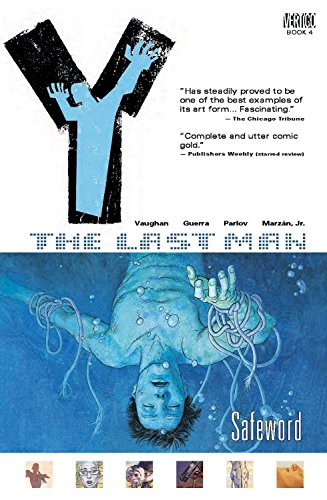 After a devastating plague, Yorrick Brown is the last man left alive in a world of women. On the run from Amazon extremists who would be happy to see him dead, his friends leave him in the care of Agent 711. But 711 is not the tragic woman she seems to be and Yorrick is propelled into a drug-fuelled nightmare of blood and sadism. Collects issues #18-23 of the runaway hit Vertigo series by Brian K. Vaughan (EX-MACHINA, RUNAWAYS) and Pia Guerra.

Brian K. Vaughan has previously written episodes of Swamp Thing and The Hood mini-series. His current work includes Ultimate X-Men and Ex-Machina. Pia Guerra is a new and rising star in comics. Y: The Last Man is her first published work.

Vaughan and Guerra have crafted a frequently funny, sometimes compelling, postapocalyptic American road story with a twist. A mysterious plague has wiped out every man around the globe, except for one: a sardonic 20-something romantic named Yorick. Poor Yorick, however, has to conceal his identity from man-hating Amazons, renegade separatists and all sorts of other female factions who want to use him for one thing or another. He's on the run with a government agent and a geneticist as they hope to figure out what caused the plague and how Yorick survived. This volume focuses on the character development of Yorick and geneticist Dr. Alison Mann. Vaughn spends three chapters on Yorick's past and present psychosexual traumas, as he encounters a very eccentric therapist; the next three chapters follow Dr. Mann down some dangerous roads. Vaughn is an excellent episodic writer, able to sustain a suspenseful arc of plot, themes and realistic characters from one moment to the next. Guerra's art is unremarkable but competently conveys all kinds of action. Most important, Vaughn makes readers care for his characters. In the tradition of much good sci-fi writing, his fantastic plague backdrop is a very clever way of isolating and expanding on simple human themes of love, loneliness, fear and, of course, gender relations.
Copyright © Reed Business Information, a division of Reed Elsevier Inc. All rights reserved.

Shipping: US$ 40.66
From United Kingdom to U.S.A.
Destination, rates & speeds

Shipping: US$ 60.98
From United Kingdom to U.S.A.
Destination, rates & speeds