Items related to The Enhanced New Testament Volume I

The Enhanced New Testament Volume I 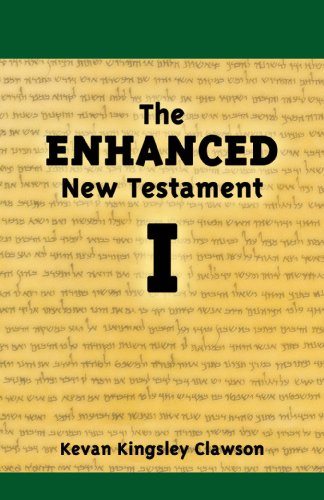 This book is not a commentary on the New Testament! Instead, the author provides actual quotes from ancient Jewish and Christian sources that provide insight into the people, places, and events surrounding the life of Jesus. There are hundreds of books, letters, and other ancient Christian and Jewish manuscripts, not included in our modern Bible, that provide additional information about the life of Jesus, his Apostles, and the early Christians. The sources used in this book are varied: historians such as Josephus (a Jew) and Eusebius (a Christian); philosophers such as Philo (a Jew) and Origen (an early Christian); sacred manuscripts such as the Mishna (the Oral Law of the Jews), the Dead Sea Scrolls, the Nag Hammadi Library, the Pseudepigrapha and Hagiography (Christian writings not included in the Bible); and many other apocryphal sources of information relating to the New Testament. The author has carefully gleaned through these ancient sources and gathered together in one volume many pearls of great price relating to the New Testament. Jesus Christ was a Jew. His earthly parents were Jews, and he was raised within a Jewish culture. In addition, all of the men chosen by Jesus to lead the church he created were Jews. Understanding Jewish culture at the time of Christ, and knowing what the Jews of that time believed and taught, is crucial for anyone striving to know Jesus as a person. This book will help you understand the religious doctrine the Jews believed prior to the birth of Jesus, and will detail many of the specific laws and rites every Jew was required to perform. It will also give you the historical background of the political and cultural events that led up to the birth of Jesus. This book also quotes ancient sources that describe in detail the structure and beliefs of the early Jewish and Christian churches. It also documents changes that occurred to the church Jesus created after the death of the original Apostles and the dramatic suffering many Christians were forced to endure because of their beliefs. All of this information, and much, much, more is provided, not as a commentary, but through actual quotes from ancient sources that had first-hand knowledge of the events they were describing! Through reading the words of these ancient Jews and Christians, your understanding of the New Testament will truly be enhanced ! Volume I includes: an Introduction; an Abbreviation of References; a Table of Contents for both Volume I and II; and Important Aids to Reading this Book. Volume II includes: a Table of Contents for both Volume I and II; Important Aids to Reading this Book; and an extensive Index for both volumes.

Review:
I cannot say enough about this set.  Serious students of the New Testament should waste no time in obtaining these volumes. I guarantee that they'll enrich your Scripture study in ways that few other works can.   Jeffrey Needle, Association for Mormon Letters