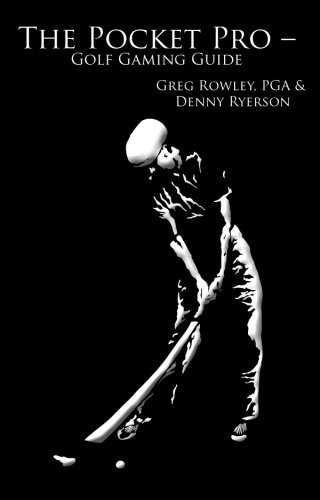 There are some ways to play this old game that have proven to enhance a golf experience by adding an element of risk - and if you ultimately come out on top, possible financial reward. The good news is that none of these common golf games have anything to do with ability. They're simply designed to create action on every hole, which makes them much more interesting than standard stroke-play (add up your score at the end of the round) golf. In addition, when you play them you'll get to use some really fun words like moochey, stinky, wolf, slop, skin, pig, press, pick-or-pass, flip and flop.

The Pocket Pro doesn't attmep to explain every version of every golf game - just those that our experience has taught us to be most common. You don't need a vague understanding of lots of games. You need a thorough understanding of only a couple for every size group.

The Pocket Pro will provide you with the tools needed to more thoroughly enjoy golf with your family and friends. We're sure you'll soon agree that orchestrating a new game and keeping the score isn't nearly as complicated as you ight have previously thought.

PGA member Greg Rowley, author of Golf, Naked: The Bare Essentials Revealed (Pick It Up Publishing, March 2009), has worked at and managed some of the finest golf facilities in the United States. The Club at Black Rock, where he was the Director of Golf, was named Golf Digest's "Best New Private Course" in 2003. In 2004, Greg was named by Men's Journal as having one of the "50 Best Jobs in America." He serves on the Board of Directors for the Inland Empire Chapter of the PGA and has won several awards for his innovative programs, including the 2008 President's Award for Growing the Game of Golf. Greg has played with and taught men, women, juniors, seniors, celebrities, professional athletes, PGA Tour players and beginners. Rowley graduated from the University of Idaho with a degree in Psychology. He minored in varsity volleyball, intramural basketball, fraternity antics, and barroom activities - including, but not limited to, beer-pong, billiards, foosball, shuffleboard and darts. Greg lives in Coeur d'Alene, Idaho with his wife, Jillian, his daughter's Taylin and Marin, and two big black dogs. He can usually be found relaxing on Hayden Lake, driving over things in his Jeep, completing in local Pro-Am Golf tournaments, or playing co-ed rec-league volleyball and softball. He plays third base.