Items related to Mongolia: The Circle in the Clouds

John Hopkins; Nancy Hopkins Mongolia: The Circle in the Clouds

Mongolia: The Circle in the Clouds 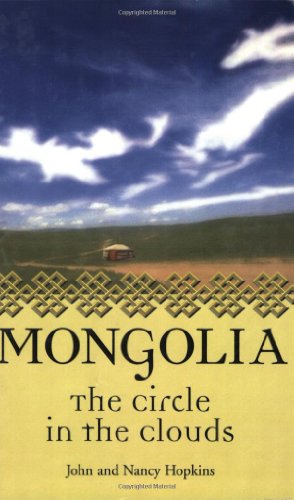 Nancy Hopkins had always been told by her mother that if she misbehaved she would be sent to Outer Mongolia. Imagine her surprise when, upon receiving her mission assignment for The Church of Jesus Christ of Latter-day Saints, she and her husband John were informed they would be sent to Mongolia! They quickly learned that being sent to Mongolia was no longer a punishment, but a wonderful blessing.

This book follows the Hopkinses through their humanitarian service mission to Mongolia. Follow the Hopkinses as they explore the ever-changing world of Mongolia.

You can feel the tension as they experience the danger of the black market. You will laugh at their escapades as they travel to the far ends of the earth and try to find their way back. Your soul will ache with compassion as you experience the hardships of Mongolia: the cold, the droughts, the poverty, the young children living underground in the sewers of the cities.

About the Author:
John E. and Nancy M. Hopkins reside in Bucks County, Pennsylvania (just north of Philadelphia). They received their Bachelor of Arts degrees in Elementary Education with John continuing on to The Ohio State University where he received his Masters and Ph.D. degrees.

John taught and served as principal in several elementary schools in Columbus, Ohio and later became a central office administrator. Following the completion of his graduate degrees he was employed as an Assistant Dean in the School of Education at Indiana University, Bloomington. From IU, John was hired to work for a non-profit educational research laboratory in Philadelphia, Research for Better Schools, where he served as the Executive Director for 20 years prior to his retirement in 1996.

Nancy has been a homemaker and mother to five children during the 50-plus years of their marriage, while also serving in a variety of positions within The Church of Jesus Christ of Latter-day Saints. Their children are: Kim Griesemer, Terri Clawson, Christopher Hopkins, Patrick Hopkins, and Jennifer Asplund.

John and Nancy have served two missions for The Church of Jesus Christ of Latter-day Saints, the first as humanitarian missionaries in Mongolia in 1997Â–1998. During this period, they coordinated the English project and John served as country director for humanitarian service couples and activities in Mongolia. Nancy taught English as an International Language (EIL) in several universities and the Ministry of Justice for Mongolia. Their second mission in 1999Â–2001 was served in the Asia Area Office in Hong Kong as Area Welfare Agents. During this period they managed church welfare programs in the countries of China, Taiwan, Laos, Vietnam, Mongolia, and Hong Kong. After nineteen months in Hong Kong (January 2001), they were transferred back to Mongolia and served another nine months creating employment programs for returned missionaries and unemployed members. They returned home in late October 2001.

Review:
Reviewed by Catherine K. Arveseth of Meridian Magazine I was surprised by The Circle in the Clouds pleasantly surprised by how much I enjoyed reading the travels of John and Nancy Hopkins through the urbanism and countryside of Mongolia. The Hopkins spent countless dedicated hours recording their days of humanitarian service in Mongolia; from the mundane minutes it took to clorox their vegetables to the most memorable of human moments, like a young crippled boy receiving his first wheelchair a moment that infinitely changed a life because of the selfless act of another. Initially, I felt the weakness of the book was in its structure dated chapters that read like emails home to family. The writing was not necessarily masterful or procured over time. It was dense, dripping with detail and sometimes laborious. After further reading, however, I was so impressed by the work they were doing, so invested in learning about the people of Mongolia and the growth of the church there that I couldn t stop reading. I began to fall in love with the Hopkins and their lengthy journal entries. Their approach was a down-home, hands in the dirt, unabashed here we are at our best and worst approach. It was sincere, without pretense and refreshingly open. And I liked it. As I read on, I came to greatly admire and appreciate the purpose with which they recorded each new experience... I chuckled to myself as I read of the inconveniences in Mongolia and thought that this book could either discourage or encourage seniors from serving a mission. For the Hopkins, however, the love, hospitality, and spirit of the Mongolian people far outweighed any inconvenience they would endure. For all you seniors out there contemplating missionary service read on! This might be just the thing you need to send in your papers! The zeal and energy with which the Hopkins attended to the Lord s work was astounding, as was their unconditional love for the Mongolian people... You will laugh as you read of the Hopkins outings to the black market, the Mongolians who knock on their door just to have their picture taken in front of a Television set, John s taxi ride from Darkhan to Ulaanbaatar smashed into the back seat with four other Mongolian women, the little Mongolian girl who sits on John s lap just to rub his balding head (few men go bald in Mongolia), and the singing of Old MacDonald in all of their English classes. As the Hopkins put it, The sun shines every day in Mongolia! even if it is 20 degrees below zero... I found the Hopkins book to be delightful. I must confess I skipped past the early chapters of waiting for the mission call and entering the mission training center. I wanted to get to the meaty stuff where the book really started moving. Any prospective Senior Missionary or young Missionary headed for the countryside of Mongolia should make sure they read The Circle in the Clouds. It is an honest, celebratory narration of an invaluable service to God s people in one of the farthest corners of the earth. --Meridian Magazine Review

Mongolia: The Circle in the Clouds John Hopkins and Nancy Hopkins

MONGOLIA: THE CIRCLE IN THE CLOU