Items related to Counting the Stones 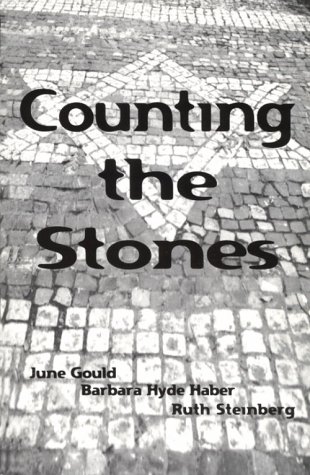 Heartwrenching, direct, personal poems about the Holocaust and the resulting dislocation endured by its survivors and their children, with 44 accompanying photographs.

In very different styles, and with different experiences, the three poets of Counting the Stones bear witness, not only to the horrors of the Holocaust, but also to the immense difficulties of starting new lives and to the pain and dislocation passed on to the second generation. The poems reach back to parents and relatives to rescue grief-frozen remembrance. In writing this book, Gould, Haber, and Steinberg created a community among themselves, and, together, the poems create their own community, one that draws the reader in. The photographs reinforce the reality of the poets and their families.

As we prepared this book of Holocaust poems, we ventured back to the lands that were hostile to our people: to our parents, aunts, uncles, cousins and grandparents. We often asked ourselves why we were willing to travel back through time.. To look at trains, cemeteries, the crematoria. Why were the old parks, cafes, teacups and monuments important to us?

We may have been displaced, we may have lost the world of our parents and grandparents, but our words bring them back and help, not only to honor them, but also to flesh them out, and by so doing flesh us out as well. In many of our poems there is the wish for the possibility of our families' having lived an ordinary life, the life of common things gestures and events. To have become not the child survivor or second generation survivor lighting candles and writing poems, but a child playing with other children in Vienna, Warsaw or Odessa.

Through our writing we found ourselves able to live alongside the past and experience the terrible places - the sites of our families' expulsions or deaths. Once there, we allowed ourselves to enter the gates of Auschwitz, walk the former ghetto internment town of Theresienstadt, count the stones at Treblinka. We let ourselves see a child walking an unsteady gangplank to the boat that will take her to safety in America, we hear how a family lost their possessions and their homeland, and even their names. We recognize the courage of the survivors' lives, and we mourn the premature deaths of those who did not survive or could not recover from the devastation.

And finally, our journey back in time allowed us to mourn the towns, cities, parks and concerts we might have had if there had been no "Final Solution." To mourn the walks down grand boulevards or small unpaved streets in tiny shtetl towns, where we could have visited our aunts and uncles, our grandparents, our cousins who are no more.

We hope our poems evoke the past and create a sense of continuity. We also desire that they become a catalyst that releases a powerful concentration of feeling, a kind of kaddish for the people and places missing in our lives. We want our words to be both homage to and a prayer for the dead and the wronged.

These were some of the reasons we wrote. But this is not a literary exercise. There are no plots to be neatly tied - no happy endings. Writing about the Holocaust requires an immense struggle to name what has been unnameable. As we wrote we found ourselves contending with competing tensions; language, irony compassion, hunger for what is lost, hunger for a justice still to be won, and we tried to embrace and endure the tension generated by these forces.

Writing these poems, then, is a kind of victory. Our poems told us and we told our poems and each other: After all, we are alive and have not forgotten. Through our words and our existence, we strike back at the demonic plans of Hitler. We are filling our obligation. We refuse to let go. Through our poems we bear witness and beckon the reader to also remember and bear witness alongside us.

Book Description Paperback. Condition: Good. Signed. 1998. SIGNED. A good softcover book with a personal inscription signed by all 3 authors. It has clean text pages and moderate cover wear. Booksavers receives donated books and recycles them in a variety of ways. Proceeds benefit the work of Mennonite Central Committee (MCC) in the U.S. and around the world. Seller Inventory # mon0000260602