Items related to The Next War 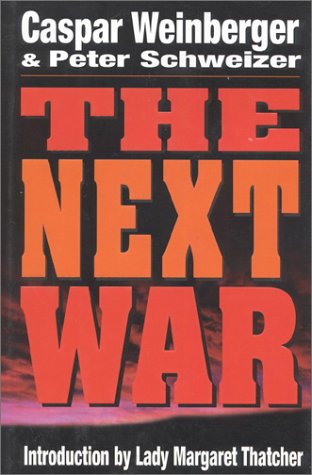 You can read The Next War as a military novel and find it riveting.-- Business Week

Imagine the following scenarios: in 1998, a full-scale war involving biological and nuclear weapons breaks out on the Korean peninsula, and China seizes the opportunity to invade Taiwan; in 1998, an Iranian-led jihad is unleashed throughout the Persian Gulf as fundamentalists rise up against secular Arab governments and organize terrorist strikes in the United States, while a nuclear weapon is detonated in Europe; in 2003, an American expeditionary force invades Mexico to topple a corrupt and recalcitrant drug-running regime in an attempt to stanch the flow of millions of refugees over the southern U. S. border. These and two other scenarios of global disaster are the "Next Wars" former Secretary of Defense Caspar Weinberger and Hoover Institute scholar Peter Schweizer consider in their new book on military readiness and defense strategy in the post-Cold War era. Their book contains both professional opinions about defense policy and fictionalized accounts of battlefield scenes in a style reminiscent of Tom Clancy, combining a human portrayal of the subject matter with detailed descriptions of weapons capabilities, military tactics, and the decision-making process of military and political leaders. This combination of narrative and policy detail makes for a highly readable account of defense tactics and captures the challenges of preparing for multiple regional conflicts under current budget constraints.

Peter Schweizer is a Visiting Scholar at the Hoover Institution on War, Revolution and Peace, at Stanford University.