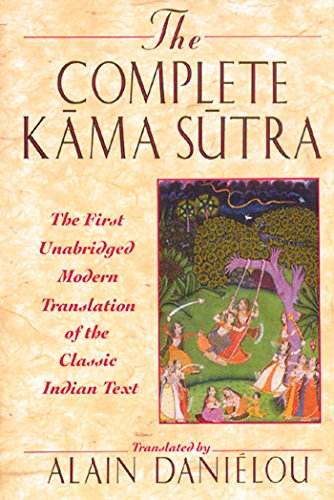 This definitive volume is the first modern translation of Vatsyayana's Kama Sutra to include two essential commentaries: the Jayamangala of Yashodhara and the modern Hindi commentary by Devadatta Shastri. Alain Danilou spent four years comparing versions of the Kama Sutra in Sanskrit, Hindi, Bengali, and English, drawing on his intimate experience of India, to preserve the full explicitness of the original. I wanted to demystify India, he writes, to show that a period of great civilization, of high culture, is forcibly a period of great liberty.

The galaxy of pleasures in Alain Daniélou's translation of the Kama Sutra takes you back to an India where sexuality was an integral part of life and an avenue to spiritual bliss. As Devadatta Shastri says in his commentary: "At the moment when the peak of bliss is attained, the internal and external world vanish. The man and woman cease to be separate entities and lose themselves in the beatitudes of being." Daniélou's elegant rendering includes not only the entire sutra, much of which is excluded in other versions, but two essential commentaries as well. More than just a pillow book, the Kama Sutra is a guide to the labyrinth of sexual etiquette, from how to bathe before meeting a lover to how lovers should entertain each other after making love. Admittedly, the text is dated and culture bound in places; it can be chauvinistic, bizarre, and even violent. The commentators are careful to point out, however, that the work is an overview of all sexual practices, some of which are not recommended. Take from this encyclopedia of amour what you will and let it keep you moving down the path of spiritual practice. --Brian Bruya

Alain Danilou (1907-1994) was without question a Renaissance man. Following his early years as an artist, dancer, and musician in Paris (Cocteau, Diaghilev, and Stravinsky were among his friends), Danilou settled in India, where he spent fifteen years in the study of Sanskrit, philosophy, and music. After numerous university appointments in India, he returned in 1963 to Europe, establishing the Institute of Comparative Music Studies in Berlin for the reevaluation of Asian music. Danilou wrote more than thirty books about the philosophy, religion, history, and arts of India, including Gods of Love and Ecstasy; Myths and Gods of India; Virtue, Success, Pleasure, and Liberation; While the Gods Play; The Phallus; and Music and the Power of Sound.