Ghalib; Bly, Robert; Dutta, Sunil The Lightning Should Have Fallen on Ghalib: Selected Poems of Ghalib 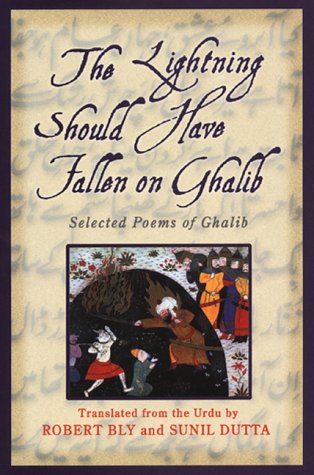 From the Author:
THE SURPRISES IN GHALIB
By Robert Bly

Perhaps in the future others will be able to do better with Ghalib poems than we have done; we know that our versions have flaws. But eachof us has drawn on his own, separate delight in Ghalib, and as Ghalib says,
"This poem has come to an end, but my longing to praise hasn't."
From the Inside Flap:
ROBERT BLY is the author, editor, and translator of numerous works of poetry and prose.  His books include his most recent Eating the Honey of Words: New and Selected Poems, Morning Poems, The Soul is Here for Its Own Joy: acred Poems from Many Cultures, pulished by the Ecco Press, and Meditations on the Insatiable Souls as well as Iron John, the Sibling Society, and The Maiden King, which he wrote with Marion Woodman.  Bly lives in Minnesota.SUNIL DUTTA is a biologist as well as a student of classical Indian music and literature. He is helping to preserve the ancient musical tradition called Dhrupad singing in India.  He was born in Jaipur, India, and now lives in Los Angeles, California.

THE LIGHTNING SHOULD HAVE FALLEN