Items related to This Land of Liberty

House, Behrman This Land of Liberty 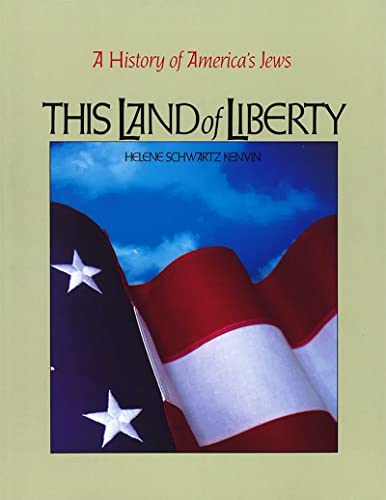 A junior high school textbook covering the history of Jews in America.

Review:
Did you know that Philadelphia's first synagogue was built with the aid of many distinguished contributors including Benjamin Franklin?; that when George Wash-ington came to Rhode Island, the head of the Newport synagogue greeted him as "brother" and welcomed him with a secret password?; that it was a Jewish firm that hired Daniel Boone to survey the Kentucky frontier?; that Jewish pioneers and pathfinders who traveled west to trade with the Indians negotiated treaties with their chiefs, mastered every Indian language from Choctaw to Ute, and improvised ways to keep kosher in the wilderness?; that Jewish abolitionists rode with John Brown?; that a Jew from Louisiana was known as "the brains of the Confederacy"?; how Robert E. Lee honored the Jewish New Year?; that a Jew was Abraham Lincoln's life-long friend and another Jew served as one of Lincoln's generals? From the earliest settlers (who arrived only 34 years after the Pilgrims landed at Plymouth Rock), to Esther Brown (the Kansas housewife whose lawsuit led to the landmark Supreme Court decision ending segregation in the public schools), Jews have been among the builders and movers of America. They came from nearly every and of the globe and they settled in nearly every corner of this continent. Their story, based on the authentic family records of generation after generation of American Jews, is told in This Land Of Liberty: A History Of America's Jews, along with more than 500 contemporary drawings, prints, and vintage photographs. This Land Of Liberty is a compendium of more than 350 years of American history as seen through the eyes of the Jews who experienced it. This Land Of Liberty deserves a place on the shelf of every school and community library throughout the country! --Midwest Book Review

This Land of Liberty Format: Paperback

This Land of Liberty: A History of America's Jews

THIS LAND OF LIBERTY: A HISTORY