Items related to Marilyn Memorabilia: Putting a Price on the Priceless... 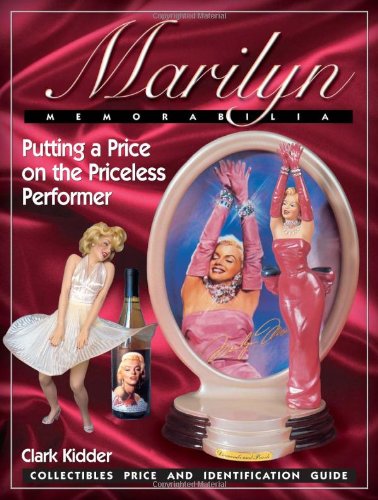 Though her life was short, Marilyn Monroe’s legacy lives on. Millions of items chronicle the amazing life and career of America’s best-known blonde. Now, Marilyn enthusiasts can learn what is highly collectible, and also what those items may be worth.

This comprehensive price and identification guide to Marilyn Monroe memorabilia offers up-to-date prices on everything linked to her, including books, figurines, calendars, photographs, and more! Values are given for more than 3,500 items in very good to near-mint condition.

Presenting more than 500 stunning photographs of collectible items, this valuable resource provides interesting historical tidbits about Marilyn, and offers a practical approach to starting or managing a collection. Collectors and anyone with an interest in the blonde bombshell will appreciate this look at the star’s amazing life and tragic death.

· Pricing for and identification of more than 3,500 items · Bonus information on buying on the Internet; fan clubs and collector resources; insuring and protecting your collectibles; and trading with others · Author Clark Kidder is an expert on Marilyn Monroe collectibles and a collector himself

Kidder has been interviewed by numerous reporters for articles in such newspapers as the Los Angeles Times, and the Chicago Tribune. His television appearances include MSNBC, PAX, WGN, Wisconsin Public Television, and Iowa Public television. He has been interviewed on numerous radio shows around the nation, including Wisconsin Public Radio and Iowa Public Radio. Kidder was host of his own television show called Book Talk on JATV, in Janesville, Wisconsin. In addition, he has provided consultation and photographs for documentaries and television shows produced by CBS, and October Films in London, England.
Kidder has co-written and co-produced a film based on his book Emily's Story: The Brave Journey of an Orphan Train Rider. It was released in 2014 and is titled West by Orphan Train. The film won the prestigious Leadership in History Award from the American Association for State and Local History and a Clarion Award in 2015. Read more on Kidder's official website at ClarkKidder.com

Marilyn Memorabilia: Putting a Price on the Priceless Performer