Items related to Hullabaloo in the Guava Orchard 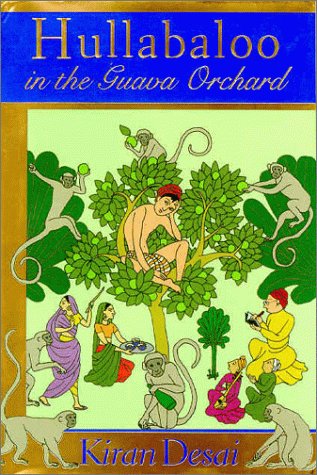 A debut novel tells the story of young Sampath Chawla, a postal worker who never feels as though he fits into the small Indian town into which he is born, and one day climbs up a tree, only to become a famous holy man. 50,000 first printing. Tour.

Pity the poor Chawla family of Shahkot, India--their son, Sampath causes all kinds of trouble for his family, culminating in a Hullabaloo in the Guava Orchard, but in a village like Shakhot, hullabaloo is a way of life. Indian writer Kiran Desai begins her first novel with Sampath's birth at the tail-end of a terrible drought. His mother, Kulfi, half-maddened by heat and hunger, can think of nothing but food: "Her stomach grew larger. Her dreams of eating more extravagant. The house seemed to shrink. All about her the summer stretched white-hot into an infinite distance. Finally, in desperation for another landscape, she found a box of old crayons in the back of a cupboard and ... began to draw.... As her husband and mother-in-law retreated in horror, not daring to upset her or the baby still inside her, she drew a parade of cooks beheading goats." Sampath's father, Mr. Chawla is a man for whom "oddness, like aches and pains, fits of tears and lethargy" is a source of discomfort; he fears "these uncontrollable, messy puddles of life, the sticky humanness of things." This distaste for sticky humanness will prove problematic for Mr. Chawla later in life when his son grows up to become a young man possessed of a great deal of feeling and very little common sense or ambition.

Mr. Chawla's frustration comes to a head when Sampath loses his menial job at the post office after performing an impromptu cross-dressing strip-tease at his boss's daughter's wedding. Confined to the house in disgrace, Sampath runs away from home and takes refuge in the branches of a guava tree in an abandoned orchard outside of town. At first family and townsfolk think he's mad, but in an inspired moment of self-preservation Sampath, who had spent his time in the post office reading other people's mail, reveals some choice secrets about his persecutors and convinces them that he is, in fact, clairvoyant. It isn't long before Mr. Chawla sees the commercial possibilities of having a holy man in the family, and pretty soon the guava orchard has become the latest stop along the spiritual tourism trail.

Take one holy man in a guava tree, add a venal father, a food-obsessed mother and a younger sister in love with the Hungry Hop Kwality Ice Cream boy and you've got a recipe for delicious comedy. Mix in a rioting band of alcoholic monkeys, a journalist determined to expose Sampath as a fraud, an unholy trio of hypochondriac district medical officer, army general and university professor, all determined to solve the monkey problem, and you've got a real hullabaloo. Kiran Desai's delirious tale of love, faith, and family relationships is funny, smartly written, and reminiscent of other works by Indian authors writing in English such as Salman Rushdie's The Moor's Last Sigh, Banerjee Divakaruni's The Mistress of Spices and Shashi Tharoor's Show Business. --Alix Wilber

In her dazzling, much-heralded debut novel, Kiran Desai tells a wryly hilarious and poignant story of life, love, and family relationships-simultaneously capturing the vivid culture of the Indian subcontinent and the universal intricacies of human experience. Hullabaloo in the Guava Orchard is the story of Sampath Chawla, born in a time of drought into a family not quite like other families, in a town not quite like other towns. After years of failure at school, failure at work, of spending his days dreaming in the tea stalls and singing to himself in the public gardens, it does not seem as if Sampath is going to amount to much. "But the world is round," says his grandmother. "Wait and see! Even if it appears he is going downhill, he will come up on the other side. Yes, on top of the world. He is just taking the longer route." No one believes her, until one day Sampath climbs a guava tree in search of peaceful contemplation and becomes unexpectedly famous as a holy man.

Sampath's newfound fame sends the tiny town of Shahkot into turmoil. His feisty sister falls in love with the very unsuitable Hungry Hop Ice Cream Boy; a syndicate of larcenous, alcoholic monkeys terrorizes the pilgrims who cluster around Sampath's tree; his father attempts to turn the orchard into a highly profitable carnival scene; and an overzealous spy determines to get to the bottom of it all and, to his consternation, achieves this goal in a most unpleasant way. In short, none of Kiran Desai's outrageous characters goes unaffected as events spin increasingly out of control.

"Lush and intensely imagined. Welcome proof that India's encounter with the English language continues to give birth to new children, endowed with lavish gifts."--Salman Rushdie

"Desai is a lavish, sharp-eyed fabulist whose send-up of small-town culture cuts to the heart of human perversity."--The New Yorker

"A voice, and a huge imagination, leap from the pages of Hullabaloo in the Guava Orchard.... Desai creates a whole tableau--like a medieval tapestry in which all the people and animals start moving and speaking-affectionately describing a village atmosphere and the familial relationships within it."--The New York Times Book Review

"So fresh and funny and delicious that it defies comparison."--The Times (London)

"There is so much to admire in this charming book, dainty in its construction but ballasted by real emotion, that to call Desai a young writer of promise would do her a disservice. On this showing, she is already a finished article."--The Sunday Telegraph (London)

"A delicious blend of humor and magic, hilarity and wisdom-and unexpected poetry. Kiran Desai's language will continue to delight you long after you turn the last page."--Chitra Banerjee Divakaruni

"With this radiant novel, Kiran Desai parts the waters. Hullabaloo in the Guava Orchard evokes a bright, buoyant world, and the warmth and generosity of her writing makes for a joyous debut."--Junot Díaz

"A hullabaloo of a debut from a vibrant, creative imagination."--Gita Mehta

"Desai's book is a festival of comic eccentricity.... The novel exudes charisma, poetry, and joy in language. It's a sparkling debut."--The Baltimore Sun

"Clearly envisioned and opulently told.... Hullabaloo in the Guava Orchard is as memorable as its title. With it, Desai joins the ranks of Anglo-Indian writers who have energized English literature with their imaginative, complex storytelling."--The Chicago Tribune