Items related to The Lizard King: The Essential Jim Morrison 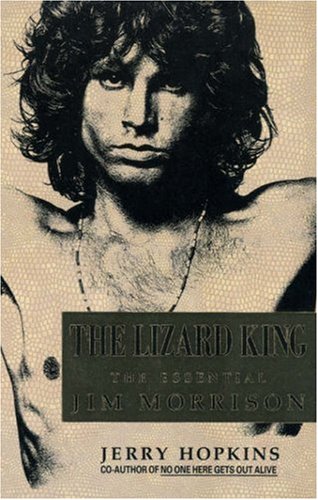 Jim Morrison was more than just the lead singer of the Doors. He was a controversial figure who emerged during the 1960s, and his enigmatic style and influence have grown steadily since his death in 1971. Known as a poet, mystic, and shaman, the "Lizard King" performed rock concerts like rituals and took the worship of Dionysus seriously, carrying the torch of Pagan ideals all the way to death. Because of his bizarre cult status, the real man has gradually disappeared behind the myth.

About the Author:
Jerry Hopkins co-authored No One Here Gets Out Alive — the five-million copy bestseller, which was on the New York Times bestseller list for over nine months.
Review:
'A refreshing addition to the already large shelf of books about the Doors and their lead singer. Neither mythmaker nor debunker, Hopkins views Morrison as a talented yet disturbed person, easy to dislike but impossible to dismiss. In particular Morrison fans will welcome the most vivid descriptions of the star's death ever published, an unusually sensitive treatment of his first wife, Pam Courson, and a previously unpublished interview ... His polished style and sense of balance, evident throughout, add luster to this well-explored subject.' —Publishers Weekly

'It seems appropriate that Hopkins, who co-authored No One Here Gets Out Alive, offered the first mainstream Morrison biography and the basis for Oliver Stone's 1991 film The Doors ... Hopkins hits all the biographical high-water marks and provides new information regarding Morrison's family, the infamous Miami trial and, most importantly, Morrison's death, which was ambiguously treated in the previous book. Ultimately, the explication of the man who would be Lizard King is best left to Morrison himself, and the collection of seven interviews that follow the narrative yields the most insight ... this is a solid contribution to the burgeoning Morrison/Doors canon.' —Library Journal

'Hopkins, the coauthor of the five-million-copy bestseller No One Here Gets Out Alive, presents startling new material he has unearthed about Jim Morrison, notorious lead singer of The Doors. Hopkins now reassesses Morrison's life and death and provides insights on Morrison the human being.' —Ingram

THE LIZARD KING: THE ESSENTIAL J