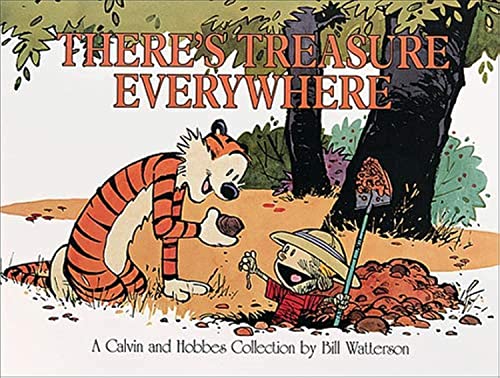 In the world that Calvin and his tiger Hobbes share, treasures can be found in the most unlikely places, from the outer regions where Spaceman Spiff travels to the rocks in the backyard--this curious duo roams their world in search of fortunes (and misfortunes!) to be experienced. Whether Calvin and Hobbes are blasting off on another interplanetary adventure or approaching warp speed on a downhill wagon ride, their capers consistently charm and refresh their readers' days. On his own, Calvin is prey to the insidious killer bicycle, is the arbiter of the Dad poll, is the creator of a legion of snowmen who provide an incisive social commentary, and Hobbes is always there as the perfect companion. Watterson's talent is evidenced by the range of thought-provoking emotions the strip encompasses in addition to the laughs it induces: the loyalty and friendship between Calvin and Hobbes, the challenge of being a patient parent, and the sardonic viewpoint of a cynical six-year-old ("I'm a 21st-century kid trapped in a 19th-century family," laments Calvin) combine to make this one of the best-loved strips in cartoon history.

Few writers--and even fewer cartoonists--have captured the imagination of childhood more effectively than Watterson in his many Calvin and Hobbes cartoons--and apart from his Tenth Anniversary Book, this is probably my favorite Calvin and Hobbes collection.

Bill Watterson is the creator of Calvin and Hobbes, one of the most popular and well-regarded cartoon strips of the twentieth century. Calvin and Hobbes appeared in newspapers from November 1985 until Watterson's retirement in 1995.