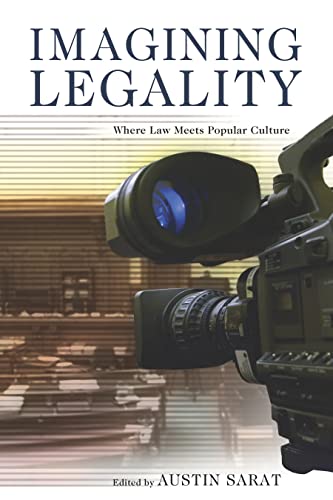 Imagining Legality: Where Law Meets Popular Culture is collection of essays on the relationship between law and popular culture that posits, in addition to the concepts of law in the books and law in action, a third concept of law in the image—that is, of law as it is perceived by the public through the lens of public media.

Austin Sarat is the William Nelson Cromwell Professor of Jurisprudence and Political Science at Amherst College and Justice Hugo L. Black Visiting Senior Faculty Scholar at The University of Alabama School of Law. He is the author or editor of over seventy books on law and society, and he is the editor of the journals Law, Culture, and Humanities and Studies in Law, Politics, and Society. He also edits the book series Cultural Lives of Law at Stanford University Press. Contributors:  Montré D. Carodine earned her J.D. from Tulane, where she was a member of the Tulane Law Review. She served as a law clerk to the Honorable Carl E. Stewart, U.S. Court of Appeals for the Fifth Circuit, and then practiced with Fulbright & Jaworski in Houston, Texas. She began teaching at Washington and Lee and later joined The University of Alabama law faculty where she is an associate professor of law. She teaches Evidence, Race and the Law, Civil Procedure, and International Litigation. Her recent publications have appeared in the Maryland Law Review, the Indiana Law Journal, and the William & Mary Law Review.  Alan L. Durham received his law degree from the University of California at Berkley, and has served in private practice in Palo Alto, California, with the law firms of Brown & Bain and Morrison and Foerster, emphasizing high-technology intellectual property litigation, especially relating to patents and trade secrets. He is the author of Patent Law Essentials: A Concise Guide. As a professor of law, he now teaches intellectual property and torts at The University of Alabama.      Grace Soyon Lee is an assistant professor at The University of Alabama School of Law, where she teaches Contracts, Business Planning, and Secured Transactions. She received her B.A. from Williams College and her J.D. from Northwestern University School of Law. Prior to joining The University of Alabama faculty, Lee clerked for the Honorable Richard Enslen of the Western District of Michigan and worked in the tax departments of Mayer Brown LLP and Latham & Watkins LLP.     Desmond Manderson holds the Canada Research Chair (Tier 1) in Law and Discourse at the Faculty of Law, McGill University, and is foundation director of the Institute for the Public Life of Arts and Ideas, which promotes innovative interdisciplinary research and teaching right across the humanities. His interdisciplinary work has led to essays and lectures around the world in the fields of literature, philosophy, ethics, history, cultural studies, music, art, and anthropology, as well as in law and legal theory, and his books include From Mr. Sin to Mr. Big; Songs Without Music: Aesthetic Dimensions of Law and Justice; and Proximity, Levinas, and the Soul of Law.     Anna McCarthy is associate professor of cinema studies at New York University, where she teaches courses on film and television history, Marxist cultural theory, historiography, and media theory. She is coeditor of the journal Social Text; her books include Ambient Television, The Citizen Machine, and the coedited anthology Media Space. She has held fellowships at a number of institutions, including the Smithsonian and the Annenberg School for Communication. In 2011, she will be a fellow at the International Center for Cultural Technology and Media Philosophy at the Bauhaus University, Weimar. She earned her Ph.D. from Northwestern University.     Naomi Mezey received a master's degree in American Studies from the University of Minnesota and a J.D. from Stanford Law School, where she served as an articles editor for the Stanford Law Review. She has worked as a law clerk for Judge Marilyn Hall Patel of the United States District Court for the Northern District of California, and as a legislative aide to former senator Alan Cranston. She is a professor of law at Georgetown University Law Center, with a focus in the fields of legislation, civil procedure, jurisprudence, and law and culture.     Laurie Oullette received her Ph.D. in communication at the University of Massachusetts, Amherst, and now works as an associate professor of communication studies at the University of Minnesota, where she teaches courses such as Reality TV: History, Culture and Economics; Critical Television Studies; Media and Consumer Culture; and Media Historiography. She is coauthor of Better Living through Reality TV: Television and Post-Welfare Citizenship, coeditor of Reality TV: Remaking Television Culture, and author of Viewers Like You? How Public TV Failed the People.     Michael S. Pardo, associate professor of law at The University of Alabama, writes and teaches in the areas of evidence, criminal procedure, civil procedure, and jurisprudence. He has authored numerous publications in law reviews (including the Texas, Illinois, Boston College, Iowa, and Northwestern Law Reviews, among others) and peer-reviewed journals (including Legal Theory, Law & Philosophy and the Journal of Legal Studies, among others). He is currently the chair-elect of the American Association of Law Schools Section on Evidence. He received his J.D. from Northwestern University.     David E. Patton serves as the director of the Criminal Defense Clinic and as an assistant professor of law at The University of Alabama. Prior to joining the faculty, he spent six years working as a trial attorney in the Federal Defender office in the Southern District of New York while also teaching the Federal Defender Clinic at New York University School of Law. He earned his J.D. from the University of Virginia.
Richard K. Sherwin is a professor of law and director of the Visual Persuasion Project at New York Law School. He is the author of When Law Goes Pop: The Vanishing Line between Law and Popular Culture and Visualizing Law in the Age of the Digital Baroque both of which explore the impact of visual communication technologies on the theory and practice of law. A frequent commentator on the relationship between law, culture, film, and digital media, Professor Sherwin's media appearances include NBC's Today Show, PBS, CNN, MSNBC, and American, Irish, and Australian National Public Radio.

Normal0falsefalsefalseMicrosoftInternetExplorer4“There is no question that this collection of essays is an original and significant contribution the field, drawing attention from a wide range of scholars concerned with the role that popular culture plays in the constructing of legal meaning. The essays in this volume capture the relationship between popular culture and the law in all its complexity. They offer careful yet creative scholarship that offers new and provocative ways to imagine the relationship between law and popular culture.”--Susan Burgess is a professor of Political Science and Women’s Studies at Ohio University and the author of The Founding Fathers, Pop Culture, and Constitutional Law: Who's Your Daddy? and The New York Times on Gay and Lesbian Issues

Normal0falsefalsefalseMicrosoftInternetExplorer4“Imagining Legality is an exciting and innovative addition to the field of cultural legal studies, drawing upon the work of some of its best-known scholars. Bristling with a rich range of theoretical perspectives and generic references, Imagining Legality is a stand-out collection; and will become a standard work of reference for scholars and students of law and popular culture alike. With a hit like Imagining Legality, Austin Sarat proves, once again, why he is, without doubt, the David Kelly of televisual and cinematic jurisprudence!”--William MacNeil is Dean of the Griffith Law School at Griffith University in Queensland, Australia, and the author of Lex Populi: The Jurisprudence of Popular Culture. He is also Associate Editor of Law, Culture & the Humanities: An Interdisciplinary Journal.

Book Description Paperback. Condition: Fine. Item is in like new condition with minor shelf wear. Might have a remainder mark or slight wear from sitting on the shelf. Seller Inventory # DS-0817356789-1