Items related to Explorers Of The Mississippi (Fesler-Lampert Minnesota... 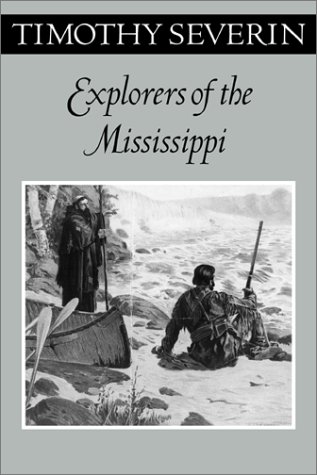 The Mississippi River has intrigued the footloose for centuries. Here, for the first time in paperback, are briskly told biographies of the chief protagonists in the drama, with Old Man River as the constant and invincible antagonist. From conquistadors to nineteenth-century gentlemen explorers, Severin depicts the disasters and adventures of familiar, but often misunderstood, figures in American history, as well as the chicanery of others, less well known, who used the river for their own purposes.

"A first-rate piece of work, rich in period and personality. Severin considers the true elucidators of the river-Joliet, Marquette, La Salle, and Henry de Tonti-plus a smattering of frauds and dilettantes, among whom he includes Lieutenant Zebulon Pike." New Yorker

" Traveling side by side with each of his intrepid voyagers, Severin will make every armchair Huck Finn yearn to sign up for the next trip." New York Times Book Review

Historian Timothy Severin has made a career of retracing and writing about epic voyages. His myriad adventures include canoeing the Mississippi River from beginning to end, sailing in St. Brendan the Navigator's path across the Atlantic Ocean, and journeying on horseback in Mongolia in search of Gheghis Khan's heritage. He lives in Ireland

Tim Severin is an explorer, traveller, author, film-maker and lecturer. In addition to The Brendan Voyage, he has also travelled in pursuit of the legends of Sinbad the Sailor, Jason and Argonauts, Ulysses, Genghis Khan, Moby Dick and Robinson Crusoe. He has won numerous book awards, the Gold Medal of the Royal Geographical Society, and the Livingstone medal of the Royal Scottish Geographical Society. He has Honorary Doctorates of Letters from University College Cork and Trinity College Dublin, and lives in West Cork.

Severin will make every armchair Huck Finn yearn to sign up for the next trip. -- New York Times Book Review

Explorers Of The Mississippi (Paperback)

Explorers Of The Mississippi Format: Paperback

Explorers Of The Mississippi

Shipping: US$ 12.52
From United Kingdom to U.S.A.
Destination, rates & speeds

Shipping: US$ 12.58
From United Kingdom to U.S.A.
Destination, rates & speeds

Shipping: US$ 31.46
From United Kingdom to U.S.A.
Destination, rates & speeds