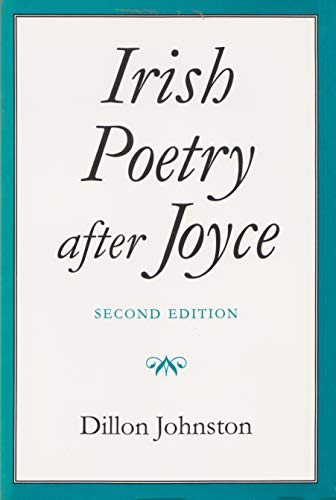 William Butler Yeats has been long considered the standard by which all Irish poetry is judged. Even the best of his immediate successors could not be liberated from Yeats's influence. In a new edition of his groundbreaking work, Dillon Johnston elaborates on the premise that many of Ireland's new
voices do not follow the Yeatsian model―the singular lyric or odic voice; rather, they rely on Joyce for an interplay of dramatic voices.

Johnston describes the world that contemporary poets have inherited: the legacies of Yeats and Joyce, the conflict of Unionism and Nationalism, the Irish language itself, and the politics of literature after World War II. He then explores the poetry of successors to both Yeats and Joyce. Austin Clarke is paired with Thomas Kinsella, Patrick Kavanagh with Seamus Heaney, Denis Devlin with John Montague, and Louis MacNeice with Derek Mahon. This edition, encompassing major poets of the last fifty-five years, includes the work of Paul Muldoon, Richard Murphy, Eavan Boland,
Medbh McGuckian, and Eilean Ni Chuilleanain.

Dillon Johnston lectures and publishes widely on Irish literature. As director of the Wake Forest University Press, he has for decades introduced to the American public the finest in contemporary Irish poetry.