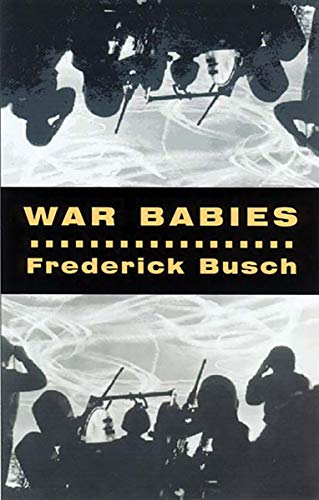 Frederick Busch's novel War Babies is a short, powerful moral tale that sheds light upon the insidious nature of evil and the grip history holds on the lives of the seemingly protected innocent.

Peter Santore, the narrator, is an American lawyer in his mid-thirties come to England to track down a certain Hilary Pennels, the daughter of a Korean War hero who died in a POW camp, the same camp in which Peter's own father turned traitor and whose informing became, perhaps, the cause of Hilary's father's death. Only Hilary's guardian, Fox himself a survivor of the camp can explain, if he will, the troubling past that haunts the now fully grown "war babies." As Frederick Busch's relentless narrative bears down upon this complexity of betrayals, the lines between exploiter and exploited become eerily blurred.

From the Back Cover:
This is a short, powerful moral tale that sheds light upon the insidious nature of evil and the grip history holds on the lives of the seemingly protected innocent.
About the Author:
Frederick Busch (1941–2006) was the recipient of many honors, including an American Academy of Arts and Letters Fiction Award, a National Jewish Book Award, and the PEN/Malamud Award. The prolific author of sixteen novels and six collections of short stories, Busch is renowned for his writing’s emotional nuance and minimal, plainspoken style. A native of Brooklyn, New York, he lived most of his life in upstate New York, where he worked for forty years as a professor at Colgate University.