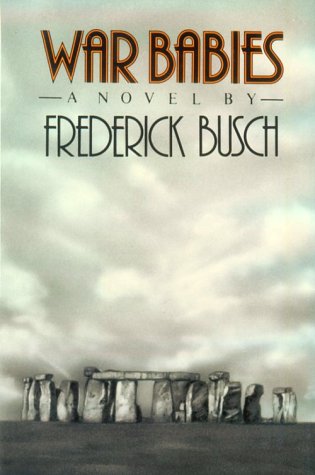 A short but powerful tale weaving together moral complexity and romantic intrigue, Frederick Busch’s War Babies is the story of an American lawyer in his mid-thirties (Peter Santore) who travels to England in an attempt to tie up the loose ends of his own dark past.

Peter’s father, a prisoner who turned traitor in a Korean War POW camp, might have had something to do with a fellow captive’s death, the father of one Hilary Pennels––now a woman Peter’s age who lives in Salisbury. When Peter and Hilary meet, they both want information from the other, and more, and find themselves engaged in a wary dance of attraction laced with mistrust. But it may be a third person, the sole remaining survivor of the camp––a Mr. Fox––who holds the key to the mystery of betrayal that haunts Peter and Hilary alike.

From the Back Cover:
This is a short, powerful moral tale that sheds light upon the insidious nature of evil and the grip history holds on the lives of the seemingly protected innocent.
About the Author:
Frederick Busch (1941–2006) was the recipient of many honors, including an American Academy of Arts and Letters Fiction Award, a National Jewish Book Award, and the PEN/Malamud Award. The prolific author of sixteen novels and six collections of short stories, Busch is renowned for his writing’s emotional nuance and minimal, plainspoken style. A native of Brooklyn, New York, he lived most of his life in upstate New York, where he worked for forty years as a professor at Colgate University.

Shipping: US$ 21.10
From United Kingdom to U.S.A.
Destination, rates & speeds