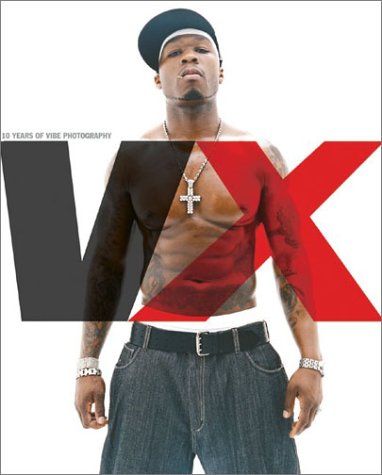 Released to celebrate ten years of VIBE, a magazine released by Qunicy Jones in 1993 to celebrate hip hop fashion, this bold survey of the last ten years of rap includes profiles of Snoop Doggy Dogg and Puff Daddy as well as the controversial image of Tupac Shakur in a straightjacket. 40,000 first printing.

Rob Kenner is VIBE Books' editorial director and a founding editor of the magazine. He has contributed to the VIBE History of Hip Hop and written extensively on reggae and hip hop. Former editor-in-chief of Art & Antiques magazine, he has also contributed to such magazines as Wired, Spin, InStyle, Time Out New York, and Playboy. George Pitts is the award-winning director of photography at VIBE magazine, a position he has held since the magazine's launch. He is also a painter and photographer whose writing and art have appeared in the Partisan Review, the Paris Review, One World, Juxtapose, and the New York Times Magazine.

Since 1993, VIBE magazine has documented hip-hop's prodigious rise and constant reinvention. With a foreword by founder Quincy Jones, this 10-year anniversary volume of photos from the publication's archives proves that the image-makers aren't only on the mic-they lurk behind the lens, too. Styles range widely, including Sacha Waldman's luminous, saturated, otherworldly streetscape tableaus of OutKast, Erykah Badu, RZA and Tiny Lister; Dana Lixenberg's simple, lingering portraits of Navajo-kids throwing gang signs, women idling curbside in Cape Town, and the now-iconic wistful Tupac in a bandanna; and Dean Karr's deliriously absurd action shot of Redman and a goose locked in airborne embrace. Editors Kenner and Pitts have organized the collection less by history than by composition-Wesley Snipes's mud-caked profile faces Eve's close-cropped crown; Alicia Keyes stretched across a piano abuts Ricky Martin reclining on a luxury speedboat. Still, a larger trajectory does emerge, mainly that the expressive idiosyncrasy of rap progenitors-quizzical Chuck D, skeptical Flavor Flav, stately, knowing Run-D.M.C.-has given way to the ubiquitous half-lidded, stone-faced glower: the thug pose. Other requisite images: women splayed on cars, women extending their tongues. There are striking departures from type, though, such as Nelly in bejeweled, bent-wrist, and parted-lip ecstasy or the unflinching Voletta Wallace holding a framed portrait of her son, Notorious B.I.G. Brief quotes and snippets from articles complement some of the pictures, such as Rob Kenner's gleeful note that "although Nas dropped out of school in the eighth grade his verses are beginning to be studied in university classes alongside the poetry of T.S. Eliot." 150 full-color photographs.
Copyright 2003 Reed Business Information, Inc.