Items related to The Omnivore's Dilemma: The Secrets Behind What...

Pollan, Michael The Omnivore's Dilemma: The Secrets Behind What You Eat, Young Readers Edition 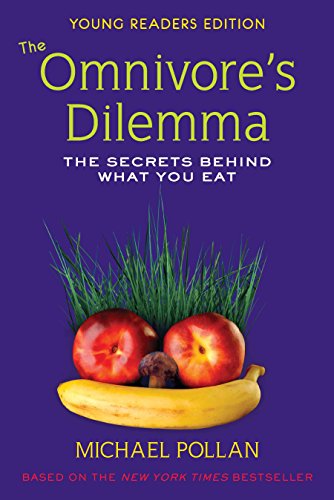 “What’s for dinner?” seemed like a simple question—until journalist and supermarket detective Michael Pollan delved behind the scenes. From fast food and big organic to small farms and old-fashioned hunting and gathering, this young readers’ adaptation of Pollan’s famous food-chain exploration encourages kids to consider the personal and global health implications of their food choices.

In a smart, compelling format with updated facts, plenty of photos, graphs, and visuals, as well as a new afterword and backmatter, The Omnivore’s Dilemma serves up a bold message to the generation that needs it most: It’s time to take charge of our national eating habits—and it starts with you.

Michael Pollan is the author of five books: Second Nature, A Place of My Own, The Botany of Desire, which received the Borders Original Voices Award for the best nonfiction work of 2001 and was recognized as a best book of the year by the American Booksellers Association and Amazon, and the national bestellers, The Omnivore's Dilemma, and In Defense of Food.

A longtime contributing writer to The New York Times Magazine, Pollan is also the Knight Professor of Journalism at UC Berkeley. His writing on food and agriculture has won numerous awards, including the Reuters/World Conservation Union Global Award in Environmental Journalism, the James Beard Award, and the Genesis Award from the American Humane Association.

Before I began working on this book, I never gave much thought to where my food came from. I didn’t spend much time worrying about what I should and shouldn’t eat. Food came from the supermarket and as long as it tasted good, I ate it.

Until, that is, I had the chance to peer behind the curtain of the modern American food chain. This came in 1998. I was working on an article about genetically modified food—food created by changing plant DNA in the laboratory. My reporting took me to the Magic Valley in Idaho, where most of the french fries you’ve ever eaten begin their life as Russet Burbank potatoes. There I visited a farm like no farm I’d ever seen or imagined.

It was fifteen thousand acres, divided into 135-acre crop circles. Each circle resembled the green face of a tremendous clock with a slowly rotating second hand. That sweeping second hand was the irrigation machine, a pipe more than a thousand feet long that delivered a steady rain of water, fertilizer, and pesticide to the potato plants. The whole farm was managed from a bank of computer monitors in a control room. Sitting in that room, the farmer could, at the flick of a switch, douse his crops with water or whatever chemical he thought they needed.

One of these chemicals was a pesticide called Monitor, used to control bugs. The chemical is so toxic to the nervous system that no one is allowed in the field for five days after it is sprayed. Even if the irrigation machine breaks during that time, farmers won’t send a worker out to fix it because the chemical is so dangerous. They’d rather let that whole 135-acres crop of potatoes dry up and die.

That wasn’t all. During the growing season, some pesticides get inside the potato plant so that they will kill any bug that takes a bite. But these pesticides mean people can’t eat the potatoes while they’re growing, either. After the harvest, the potatoes are stored for six months in a gigantic shed. Here the chemicals gradually fade until the potatoes are safe to eat. Only then can they be turned into french fries.

That’s how we grow potatoes?

I had no idea.

A BURGER WITH YOUR FRIES?

A few years later, while working on another story, I found myself driving down Interstate 5, the big highway that runs between San Francisco and Los Angeles. I was on my way to visit a farmer in California’s Central Valley. It was one of those gorgeous autumn days when the hills of California are gold. Out of nowhere, a really nasty smell assaulted my nostrils—the stench of a gas station restroom sorely in need of attention. But I could see nothing that might explain the smell—all around me were the same blue skies and golden hills.

And then, very suddenly, the golden hills turned jet-black on both sides of the highway: black with tens of thousands of cattle crowded onto a carpet of manure that stretched as far as the eye could see. I was driving through a feedlot, with tens of thousands of animals bellying up to a concrete trough that ran along the side of the highway for what seemed like miles. Behind them rose two vast pyramids, one yellow, the other black: a pile of corn and a pile of manure. The cattle, I realized, were spending their days transforming the stuff of one pile into the stuff of the other.

This is where our meat comes from?

I had no idea.

Suddenly that “happy meal” of hamburger and fries looked a lot less happy. Between the feedlot and the potato farm, I realized just how little I knew about the way our food is produced. The picture in my head, of small family farms with white picket fences and red barns and happy animals on green pastures, was seriously out of date.

Now I had a big problem. I went from never thinking about where my food came from to thinking about it all the time. I started worrying about what I should and shouldn’t eat. Just because food was in the supermarket, did that mean it was good to eat?

The more I studied and read about food the more I realized I was suffering from a form of the omnivore’s dilemma. This is a big name for a very old problem. Human beings are omnivores. That means we eat plants, meat, mushrooms—just about anything. But because we are omnivores we have very little built-in instinct that tells us which foods are good for us and which aren’t. That’s the dilemma—we can eat anything, but how do we know what to eat?

The omnivore’s dilemma has been around a long time. But today we have a very modern form of this dilemma. We have a thousand choices of food in our supermarkets, but we don’t really know where our food comes from. As I discovered, just finding out how our potatoes are grown might scare you off french fries for the rest of your life.

In the past, people knew about food because they grew it or hunted it themselves. They learned about food from their parents and grandparents. They cooked and ate the same foods people in their part of the world had always eaten. Modern Americans don’t have strong food traditions. Instead we have dozens of different “experts” who give us lots of different advice about what to eat and what not to eat.

It’s one thing to be crazy about food because you like to eat. But I found I was going crazy from worrying about food. So I set out to try to solve the modern omnivore’s dilemma. I decided to become a food detective, to find out where our food comes from and what exactly it is we are eating. My detective work became the book you now hold in your hands.

As a food detective, I had to go back to the beginning, to the farms and fields where our food is grown. Then I followed it each step of the way, and watched what happened to our food on its way to our stomachs. Each step was another link in a chain—a food chain.

A food chain is a system for growing, making, and delivering food. In this book, I follow four different food chains. Each one has its own section. They are:

This is where most of our food comes from today. This chain starts in a giant field, usually in the Midwest, where a single crop is grown—corn, or perhaps soybeans—and ends up in a supermarket or fast-food restaurant.

This food is grown on large industrial farms, but with only natural fertilizers, and natural bug and weed control. It is sold in the same way as industrial food.

This is food grown on small farms that raise lots of different kinds of crops and animals. The food from the farm doesn’t need to be processed, and it travels a short distance—to a farmer’s market, for example—before it reaches your table.

This is the oldest type of food chain there is. It’s hardly a chain at all, really. It is made up simply of you, hunting, growing, or finding your food.

All these food chains end the same way—with a meal. And so I thought it important to end each section of the book with a meal, whether it was a fast-food hamburger eaten in a speeding car, or a meal I made myself from start to finish.

THE PLEASURES OF EATING

When I was ten years old, I started my own “farm” in a patch of our backyard. From that age until now, I have always had a vegetable garden, even if only a small one. The feeling of being connected to food is very important to me. It’s an experience that I think most of us are missing today. We’re so confused about food that we’ve forgotten what food really is—the bounty of the earth and the power of the sun captured by plants and animals.

There were parts of this book that were difficult to write, because the facts were so unpleasant. Some of those facts might make you lose your appetite. But the point of this book is not to scare you or make you afraid of food. I think we enjoy food much more if we take a little time to know what it is we’re putting in our mouths. Then we can really appreciate the truly wonderful gifts that plants and animals have given us. To me, that’s the point of this book, to help you rediscover the pleasures of food and learn to enjoy your meals in a new way.

The Omnivore’s Solution: Some Tips for Eating

I’ll bet I know your last burning question: “What now?” Now that you know all that you know about the food chains we depend on, how exactly should you fill up your plate? Most of my readers have the same question, so I’ve developed a handful of everyday rules to guide you through the newfound challenges (and possibilities!) of mealtime. (You can find more of them in the book I wrote after The Omnivore’s Dilemma, called In Defense of Food.)

My advice comes in three parts:

That sounds pretty simple, but you now know it’s not so easy to do. There are many things disguised as food in our supermarkets and fast-food restaurants; I call them “edible food-like substances” (EFLS for short) and suggest you avoid them. But how do you tell the difference between real food and EFLS? Here are a few rules of thumb: