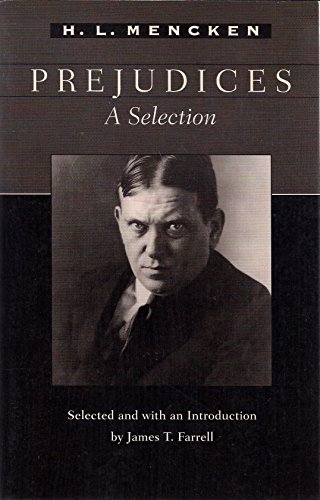 In six volumes of Prejudices published between 1919 and 1927, H. L. Mencken collected some of the best essays he ever wrote and established the style that made him a titan of the free press. Thirty years later, James T. Farrell, Mencken's friend and the author of the Studs Lonigan trilogy, read again through the Prejudices and found them still relevant and stimulating. From the six original volumes, he selected thirty-five essays―each a stick of dynamite with a burning fuse.

Here is Mencken at his hyperbolic best―from his thundering blows against politics, through his piercing deflations of pious reputations, to his tireless fusillades against the American plutocracy. He tallies the dubious merits of farmers, professors, economists, congressmen, and preachers. He calculates the displeasures of living in California―and the advantages of living in America: "Here the general average of intelligence, of knowledge, of competence, of integrity, of self-respect, of honor is so low that any man who knows his trade, does not fear ghosts, has read fifty good books, and practices the common decencies stands out as brilliantly as a wart on a bald head."

"It should be clear to the reader that the preparation of this volume was to me a joy, a labor of love, and a privilege. These selections... represent Mencken when he was at the peak of his influence and had, in fact, become a legend. Here is some of his wittiest and most buoyant writing. Something of his wide range of interests and his broad field of reference is to be found in these essays. Many of them are unforgettable. Here in my opinion, is some of the very best of H. L. Mencken."―James T. Farrell, in the Introduction

In the 1920s, when he was at the peak of his form, H. L. Mencken would periodically collect his magazine work and publish his favorite pieces in a series of books entitled Prejudices. This collection represents the best of those books. The essays were selected and introduced by novelist James T. Farrell. Prejudices: A Selection first appeared nearly 40 years ago and is now being published by Johns Hopkins University Press, which is thankfully bringing much of Mencken's work back into print. Included are such gems as Mencken's attack on the South in "The Sahara of the Bozart"; his amazingly prescient appreciation of Ring Lardner; and more than two dozen other essays which show convincingly why Mencken was one of the most popular, most feared, and among fools, the most hated writers of his day.