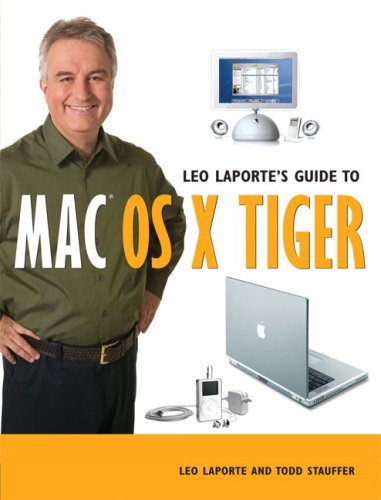 The ads make it all look so easy, so simple and oh so utterly uncomplicated, don't they? Buy a Mac, live happily ever after. While we'll agree that right-out-of-the-box, Macs are more intrinsically friendly than their PC counterparts, they get difficult in a hurry, especially if you try to do anything useful with them. Setting up wireless networking, troubleshooting network problems, dealing with peripherals run amuck, futzing with security settings and living in a PC-dominated world is enough to make even grizzled Mac veterans turn a little green around the gills. Now that the honeymoon is over and you've realized that just because you have a Mac and an iPod, you most certainly aren't invincible, it's time to make that cheery little Mac of yours do what Apple and the media would lead you to believe it can do right out of the box. Leo Laporte's Guide to Mac OS X Tiger spotlights troubleshooting, problem solving, the latest Tiger features, security and using common gadgets (iPod, smartphones, PDAs) with your Mac. This book leans away from a "describe the menus" and instead focuses on tips and techniques the help you really understand Mac OS X Tiger and how to make it sing. Throughout this book, you'll find dozens of useful tips that will help you get closer to that original Mac-driven nirvana you pictured when you first carried your beloved Mac over the threshold.

About the Author:
Leo Laporte is a weekend radio host on Los Angeles radio KFI AM 640 and co-hosts Call for Help on Canada's TechTV network. He also appears regularly on other programs including ABC's World News Now and Live with Regis and Kelly as "The Gadget Guy." He is the author of four recent bestsellers: Leo Laporte's 2005 Gadget Guide, Leo Laporte's Mac Gadget Guide, Leo Laporte's Guide to TiVo, and Leo Laporte's 2005 Technology Almanac. Todd Stauffer is the author or co-author of over three dozen computing and technical books, a contributor to various technical magazines, a humor columnist and a travel/automotive reviewer.
Excerpt. © Reprinted by permission. All rights reserved.:
Introduction

If you had to sum up the world of a Macintosh user in a single word, I'd probably go with "interesting." After all, the "mothership," as devout Mac fans call Apple, Inc., is run by none other than Steve Jobs, easily the most "interesting" executive in technology today, if not in all of corporate America. But there are other things that make working with the Macintosh interesting, such as the strong emphasis on the design of the machines, the power of the creative applications that Apple writes and (in many cases) gives away to its users, and, of course, the people like us who gravitate to the machines and use them for work and play—we may be the most interesting part of the whole darned thing.

Most central to making the Mac experience interesting, however, is undoubtedly the Macintosh operating system, which is what gives every Mac its interface, the core technology that makes up its toolset, and to a large extent its personality. Applications rely on the Mac OS for everything from the way you open and close documents, to how you manage the documents you create, to how movies and audio are played back within applications.

Mac OS X, now in its fifth significant version release, is the culmination of years of computer science and is designed to make using a Macintosh extremely interesting. In the version we discuss in this book, Mac OS X 10.4, Apple has released an extremely mature operating system, based on some of the latest computer science and technology know-how, but packaged in a user interface that looks pretty clean and futuristic even by Hollywood standards.

I guess another thing that makes us Mac users interesting is how much we can come to love the Macintosh and, by extension, the Mac OS. In many ways, this operating system can simply "get out of your way" and enable you to get some wonderful work done, as it works with the applications you run (word processing, Internet applications, video editing, professional tools) to seamlessly provide the experience you'll grow used to if you don't know it intimately. At the same time, the OS itself is a standout, with tools such as Automator to help you automate the tasks that you perform frequently, and the integration of Internet and networking tools to make your home or office a little more "connected" with relatively little configuration and effort.

If you're new to the Mac, new to Mac OS X, or simply new to this latest version, Mac OS X 10.4 "Tiger," I'm here to tell you, right now that you're in for an interesting—and hopefully extremely rewarding—experience.

Who Should Use This Book

Most of us aren't completely new to the world of computing, so I think it's time that books move from addressing the utter "newbie" and focus a little more on the rest of us—people who probably work a lot with computers and either live with them, too, or are close to buying a new machine. So I hope you'll find that the assumptions I make in the book are the right ones—you've got a passing familiarity with a mouse and have at least talked about word processing at parties (now there's an exciting party), even if you're not a devout fan yourself.

A lot of today's Mac users are people who have had Windows-based PCs in the past and are making a switch because they like Apple's other products, such as the iPod. I've tried to be sensitive to that throughout—if you're a "switcher" from Windows or if you have used a Mac in the past but aren't totally up on all the Mac OS X lingo, then you'll find a home with this book.

Most of all, I'd like to see you get through this book and feel like you've become an accomplished Mac user. So, throughout the book we're going to focus less on the type of instruction that takes you "menu by menu" through a topic and land more firmly on an accomplishment-based system—I'll show you how to use the contact management and scheduling tools, how to build a home network, how to use Mail and Safari for accessing the Internet, and so on. Call it a "success driven" model, unless that sounds too corny.

I also think that part of learning to use a Mac means learning a little about troubleshooting, so we'll spend some time on that, as well as on maintenance tasks and the utilities that make that maintenance a little easier.

So, if you're ready for a book that moves quickly from how things work to how you get them to work for you, I think you'll enjoy this one.

How This Book Is Organized

This book, too, is designed to be interesting—how could it not be? Here's a closer look:

How to Read This Book

This book is arranged largely as a tutorial, with some of the material in later chapters building on earlier chapters. That said, most of the "building" is simply understanding some of the basic interface elements—and we've cross-referenced extensively, so I feel pretty confident that you can dive into a topic that interests you and get a good sense of what's going on from the outset. In particular, you can use Chapters 12 and 13 when you need them—I'd recommend at least skimming Chapter 14 pretty quickly, though, to get a sense of the security measures you want to take at the outset.

Otherwise, feel free to jump into the discussion of the iPod once you get yourself an iPod, or you can just skim the stuff about iCal if you use a different calendar or personal information management application.

In each chapter, you'll find a few common elements to help you navigate the chapter and to help me communicate what I'm trying to get across. Such elements include

Note - Notes are items that add to the current discussion but don't really fit in the steps or bullets that are being discussed in the main text. Most of the time you'll want to read these as you're reading the rest of the text and just notice that I'm offering a little advice or a caveat.

Tip - Tips are generally items that take what we're discussing to a different level, or show you how you can integrate the current topic with others we've discussed. Mostly they're just items I ...