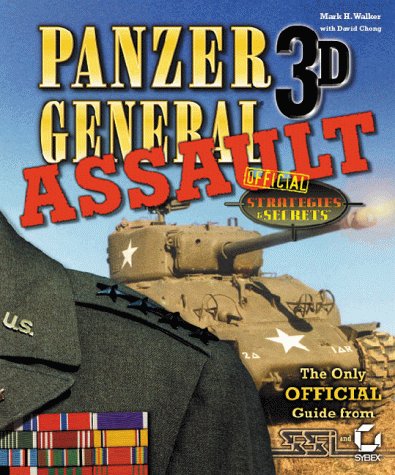 Panzer General 3D Assault is the third in SSI best-selling wargame series. The new game retains the depth and realism of the earlier games in the franchise, but the beautifully rendered 3D graphics and simplified interface also make it more appealing to a mass audience.

Fight as the American, British, German, or French forces in multiple campaigns on the Western Front. The new Action Combat System, which allows you to manage your leaders, will make you feel like the most powerful general in all of WWII.

Without compromising the depth and playability of it's critically acclaimed predecessor, the new 3D graphics of Panzer General 3D Assault will give you a realistic look-and-feel that is unprecedented in strategy games. The new games system and totally redesigned interface are an outstanding addition to the already famous Panzer General franchise.
-- True 3D with a freely rotating camera and map, as well as a dynamic lightning system.
-- New Headquarters interface allows the player to tailor make an army to fit the upcoming battle.
-- The Action Combat System gives leaders the ability to manipulate individual units and give multiple commands in each turn. The leaders with more promotions have more actions and can perform more effectively. Actions include move, fire, and special orders (entrench, refit, aim, fire, etc).
-- Over 200 3D modeled units and 20 special leader abilities.
-- Fight as the British, American, German or French in 8 campaigns in WWII's Western Front, including North Africa.
-- 10 areas of operation provide varied terrain and mission objectives.
-- Simplified and intuitive game system.
-- 30+ additional single and multi-playerscenarios.
-- 4 player multi-player.

Book Description Paperback. Condition: Very Good. Registration code has numbers on it. registered by prior owner. The pages of this book are clean and unmarked. only the book is sold here. Seller Inventory # 198991