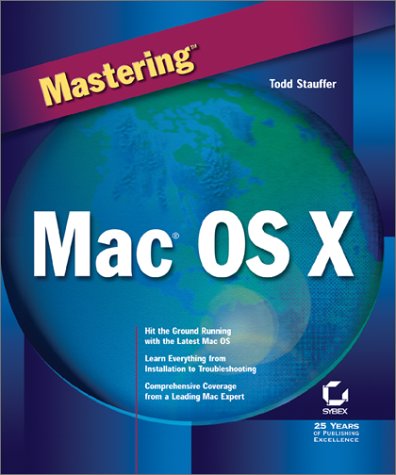 Mac OS X is Apple's next generation operating system, combining a powerful Unix-based kernel with the friendly Mac interface. Mastering Mac OS X is the most comprehensive resource available, a book for everyone who wants to become immediately productive with the latest version of the Mac operating system. Not only does it cover every feature and every built-in application in the new OS, it also includes chapters on Unix commmand-line theory and scripting, Web server tweaks, QuickTime streaming server, Samba file sharing and more. The author is a well-known Mac authority and personality; he was writer and co-host of the Emmy-winning Disk Doctors TV show, and is a contributor to MacAddict, MacCentral and Publish magazine, among others.

Review:
Apple's Mac OS X is a quantum leap in the operating system for the Macintosh computer, offering stability and depth that is unheard of in a desktop consumer-level operating system. There is a price for all this strength, however: OS X is far deeper and more complicated than any previous version of the Mac operating system. Mastering Mac OS X goes beyond Apple's own hardcopy documentation, which is minimal at best, and lays bare the workings of this state-of-the-art operating system.

Part III, "Getting Things Done with Mac OS X," discusses the use of the bundled applications (Mail, Address Book, Preview, Keychain Access, Grab, etc.), as well as the new printing architecture and how to set up printers and manage color with ColorSync; using QuickTime; and automating the OS and applications using AppleScript.

The book falls short on only a few things. There is little reference to its heritage (NeXT's NeXTStep OS) or other carryover features from NeXTStep (such as NetInfo), and not much about the Unix startup process and the scripts that run during bootup (although you will learn that you can hold down Command+V to see system messages during booting). The book is much more focused on bringing up to speed an experienced Mac user, not necessarily a user with some Unix experience who needs to know just how Apple is handling Unix.

There are many good things about this book--the troubleshooting section is informative, and there's a terrific chapter on using Terminal and writing Unix shell scripts. The appendix, "Installing and Setting up Mac OS X," in Mastering Mac OS X goes far beyond Apple's own minimal hardcopy documentation, as do the chapters on the preinstalled applications.

Mastering Mac OS X makes a fine handbook for users anxious to dig into the new operating system, and it offers a subtle introduction to some of the core Unix workings. --Mike Caputo

From the Back Cover:
The Essential Resource for New and Veteran Mac Users

Mastering Mac OS X is your comprehensive guide to the latest OS from Apple. Designed for Mac users of every experience level, this book gives you all the information you need to begin fresh with Mac OS X, or to make a fast, trouble-free transition from an earlier release.