Items related to The Mad Scientist's Guide to World Domination:... 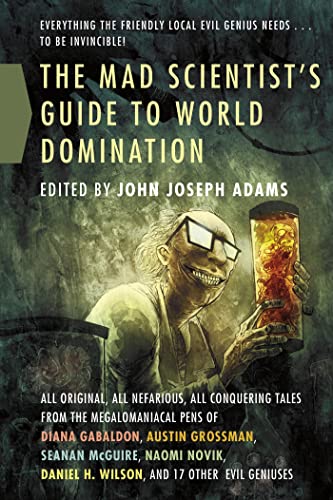 An anthology of original horror tales featuring "evil genius" archetype characters intent on ruling the world features contributions by such best-selling authors as Diana Gabaldon, Daniel Wilson and Austin Grossman. By the editor of the best-selling Wastelands. 20,000 first printing.

JOHN JOSEPH ADAMS is the bestselling editor of Wastelands, Under the Moons of Mars, Seeds of Change, The Living Dead, The Way of the Wizard, By Blood We Live, and The Improbable Adventures of Sherlock Holmes. He's a two-time finalist for the Hugo and a three-time finalist for the World Fantasy Award. He is also the publisher and editor of Lightspeed Magazine, and the cohost of Wired.com's "The Geek's Guide to the Galaxy" podcast. He lives in Coastal Central California.

Excerpt. © Reprinted by permission. All rights reserved.:
CATEGORY: Secret Identity Management Variables
RULE 967.2b: Managing Your Love Life Is No Easier for Geniuses
SOURCE: Professor Incognito, Instigator of Martian Rule
VIA: Austin Grossman
Our first journey into the realms of madness looks reasonable enough. How crazy can an itemized list really be? Well, in this story, a simple list of Professor Incognito’s apologies reads like the confession of a remarkably evil genius.
Professor Incognito likes to live the lifestyle of any classic supervillain. He’s got secret rooms and hologram projectors, midnight costume changes, and plans for sentient tigers.
There’s just one barrier lying between him and perfect happiness: his fiancée. Is there any way to explain to her that beneath his mild-mannered façade as a physics professor, he’s got the skills to take over the galaxy? Is there any way to reconcile a relationship built on lies? And should he wear his costume to their next couple’s counseling appointment?
Beneath the humor, this tale asks a more chilling question: What role do secrets play in our relationships—and do we really want to know everything about our partners? It doesn’t take a genius—evil or otherwise—to fear the consequences of a love built on lies.