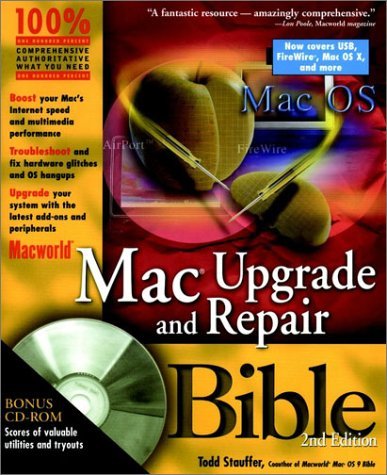 The Mac Upgrade and Repair Bible, 2nd Edition addresses the changes in the Mac market, offering coverage of new Macs and new Macintosh technologies. Specifically, the book has been enlarged and expanded to cover the iMac line, from the original iMac through the iMac DV series, the iBook line, the PowerBook G3 series and the Power Macintosh G3 and G4 machines that have been introduced since the first edition. All of these machines offer new ways to expand and upgrade storage, processing and input/output tasks. Likewise, they offer new troubleshooting and repair issues. Includes a CD-ROM packed with powerful utilities.

Review:
I like Todd's writing--and, boy, this book has a lot of it: 1,000-plus pages. Egad! Right away, the personality in the book jumped off the page at me. I was expecting this, being familiar with Todd's work--primarily his writing with David Pogue on (an out-of-print edition of) "Macworld Mac Secrets" and other books. (Believe it or not, I've been a Mac user since 1987.)

Unbeknownst to most PC users, there are many makes and models of the Macintosh, some of which were designed specifically never to be upgraded. Yet this book covers them all. Like other good books in this category, background and historical information are provided, in addition to data on upgrades, maintenance, and troubleshooting. Todd washes the whole engine here, not skimping on anything, and often telling a good story along the way.

My key issue of hard-drive partitioning is covered only modestly, which is unusual when one considers the vast discussion of disk storage in general. Granted, hard-disk partitioning is not as core to the Mac as it was to the early PCs (and still is today). But it'd be nice to have at least a reference to partitioning software, or a Web page--which is done often, and well, for just about every other topic in the book.

My only complaint has to do with the photographs. While the line-art illustrations are done nicely, nearly all of the photographs are too dark and contrast-y. This makes them useless in a book in which such photographs are almost crucial to getting a point across. Ignoring that single thorn in this elephant's foot, however, I was completely satisfied and enjoyed the book. It's a valuable, useful reference that I plan on keeping. --Dan Gookin

From the Back Cover:
Keep your Mac(r) smiling... Does your Mac crash a lot? Does it choke on big media files? Or limp along on the Web? Are you overdue for an upgrade? If you answered yes to any of these questions, you've come to the right place. Now revised to cover all of the latest Mac operating systems, models, and technologies - including Mac OS 9, an overview of Mac OS X, iMacs(TM), iBooks(TM), USB, FireWire(r), and DVD - this comprehensive do-it-yourself reference is just what you need to get a handle on problems, analyze annoyances, and implement the right repair or upgrade solution. Inside, you'll find complete coverage of Mac repairs and upgrades
* Refurbish an old Mac II - or fine-tune the latest models
* Identify the most common Mac problems - and what to do about them
* Understand your Mac's innards, from chips and cards to slots and ports
* Get hands-on advice for upgrading sound, networking, storage, and other subsystems
* Get the scoop on 3D graphics, digital video editing, and other cutting-edge upgrade options
* Troubleshoot problems and resolve Sad Mac and compatibility issues
* Optimize and manage the Mac OS, including backups and reinstallation
Bonus CD-ROM
* Aladdin Flashback(TM) and Shrinkwrap(TM) demo versions
* BBEdit(TM) demo from Bare Bones Software, Inc.
* TechTool(r) and Extension Overload evaluation versions
* And more
www.idgbooks.com System Requirements: PowerPC Mac running system OS 7.5.5 or later; CD-ROM drive