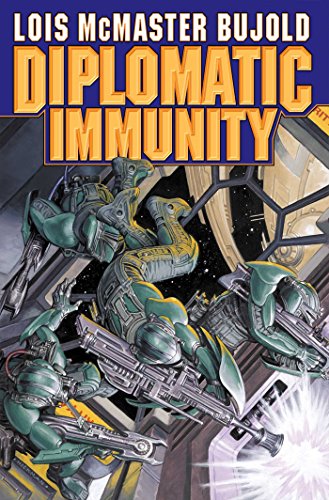 When a Komarran merchant fleet is impounded at Graf Station after a bloody incident involving a security officer from the convoy's military escort, Miles Vorkosigan and his wife are called in to untangle the diplomatic snafus, treachery, and dark secrets.

Fans won't find this surprising in the least, but Miles Vorkosigan--the plucky, short-statured hero of Lois McMaster Bujold's beloved series--is uniquely incapable of having an uneventful honeymoon. Between a racially fueled diplomatic dispute, the appearance of a hermaphroditic old flame, and a bizarre Cetagandan genetic conspiracy, Miles just can't seem to get a minute of peace with his new wife, the lovely and resourceful Ekaterin (whom Miles courted in A Civil Campaign).

Miles had hoped to give "hands-on op games" a rest once and for all, but when the Emperor urgently calls on him to resolve a "legal entanglement" in Quaddiespace, diplomacy alone might prove inadequate. (Quaddies, you'll remember, are the no-legged, four-armed free-fallers introduced in Falling Free.) Our newly minted Imperial Auditor almost immediately forgets all about "Baby's First Cell Division" (after the assignment comes in, Ekaterin quickly observes "You know, you keep claiming your job is boring, Miles, but your eyes have gone all bright"), but even Miles feels the heat after his diplomatic attempts devolve into a series of flattering assassination attempts.

Vorkosigan (and family now!) is as winning as ever, with Bujold offering up her usual fun mix of space-opera action and droll social commentary in a character-centered plot. And here's a bonus for Milesophiles and Vorkosiga novices alike: a book-by-book timeline detailing what trouble Miles got into and when. --Paul Hughes

My fantasy novels are not hard to order. Easiest of all is The Spirit Ring, which is a stand-alone, or aquel, as some wag once dubbed books thatfor some obscure reason failed to spawn a subsequent series. Nexteasiest are the four volumes of The Sharing Knife--in order, Beguilement, Legacy, Passage, and Horizon--which I broke down and actually numbered, as this is one continuous tale.

What were called the Chalion books after the setting of its first twovolumes, but which now that the geographic scope has widened I'm dubbing the World of the Five Gods, were written to be stand-alones as part of a larger whole.  However, the second volume certainly contains spoilersfor the first, so Curse-Paladin is the recommended readingorder.  The third is in effect an independent prequel, not sharingcharacters or setting with the other two, so readers of the priorvolumes need to adjust their expectations going in. In any case, thepublication order is:

Current internal chronology of the Penric & Desdemona tales is:

The short story collection ProtoZoa contains five very early tales--three (1980s) contemporary fantasy, two science fiction--all previously published but not in this handy format. The novelette "Dreamweaver's Dilemma" may be of interest to Vorkosigancompletists, as it is the first story in which that proto-universebegan, mentioning Beta Colony but before Barrayar was even thought of.

Sidelines:Talks and Essays is just what it says on the tin--a collection of three decades of mynonfiction writings, including convention speeches, essays, travelogues, introductions, and some less formal pieces. I hope it will prove aninteresting companion piece to my fiction.

Many pixels have been expended debating the 'best' order in which to readwhat have come to be known as the Vorkosigan Books (or Saga), theVorkosiverse, the Miles books, and other names. The debate mainlyrevolves around publication order versus internal-chronological order. I favor internal chronological, with a few adjustments.

Shards of Honor and Barrayar. The first two books in the series proper, they detail the adventures of Cordelia Naismith of Beta Colony and Aral Vorkosigan of Barrayar. Shards was my very first novel ever; Barrayar was actually my eighth, but continues the tale the next day after the end of Shards. For readers who want to be sure of beginning at the beginning, or who are very spoiler-sensitive, start with these two.

After that: Brothers in Arms should be read before Mirror Dance, and both, ideally, before Memory.

Komarr makes another alternate entry point for the series, picking up Miles's second career at its start. It should be read before A Civil Campaign.

Borders of Infinity, a collection of three of the five currently extant novellas, makes agood Miles Vorkosigan early-adventure sampler platter, I always thought, for readers who don't want to commit themselves to length. (But it maymake more sense if read after The Warrior's Apprentice.) Take care not to confuse the collection-as-a-whole with its title story, "The Borders of Infinity".

Falling Free takes place 200 years earlier in the timeline and does not sharesettings or characters with the main body of the series. Most readersrecommend picking up this story later. It should likely be read before Diplomatic Immunity, however,which revisits the "quaddies", a bioengineered race of free-fall dwellers, in Miles's time.

The novels in the internal-chronological list below appear in italics; thenovellas (officially defined as a story between 17,500 word sand 40,000words) in quote marks.

The novella "Weatherman" is an out-take from the beginning of the novel The Vor Game. If you already have The Vor Game, you likely don't need this.

The original 'novel' Borders of Infinity was a fix-up collection containing the three novellas "The Mountains of Mourning", "Labyrinth", and "The Borders of Infinity", together with aframe to tie the pieces together. Again, beware duplication. The framestory does not stand alone.