Items related to Monk's Reflections: A View from the Dome

Edward A. Malloy Monk's Reflections: A View from the Dome

Monk's Reflections: A View from the Dome 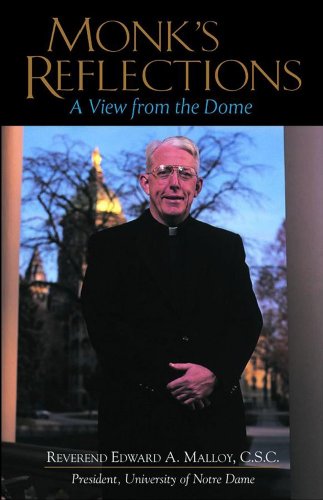 "I am excited to have this opportunity to share some of my experiences and considered reflections. . . . I hope to provide some sense of what the world looks like from my desk as the president of Notre Dame." --Father Edward Malloy

The book falls into three parts: "The University President," in which Father Malloy explains the president's role; "Academia and the Life of the Mind," in which he examines the practices of teaching and scholarship in the contemporary university setting; and "The Collegiate World," in which he comments on the nonacademic facets of college life, including athletics, residentiality, and religion.

Father Malloy writes in a warm, personable tone, often touching on his own life experiences. He is not afraid to voice strong opinions, but he does so in a compassionate manner that speaks well of him both as a priest and a president, and that makes for an eminently readable book. Notre Dame alumni are among the most dedicated and loyal in America, and will enjoy reading about Father Malloy's experiences.

Rev. Edward A."Monk" Malloy, C.S.C, graduated from the University of Notre Dame, attended the seminary formation program for the Congregation of Holy Cross, and was ordained at Sacred Heart Church on the Notre Dame campus in 1970. He has been a member of Notre Dame's theology faculty since 1974 and received his Ph.D. in Christian Ethics from Vanderbilt University in 1975. He became Notre Dame's 16th president in 1987, after previously serving as university vice president and associate provost.

The "monk" of the title is not a distant ascetic but the Rev. Edward "Monk" Malloy, the 16th president of the University of Notre Dame. Here Malloy considers, in a first-person singular account, the state of American higher education, the mission of a specifically Catholic college, and the roles, responsibilities, and relations of today's college teachers and administrators. Repeating some of the themes of his Culture and Commitment: The Challenges of Today's University, Malloy is ironic but often not specific. Such an approach lets him make his general points clearly and often wisely, but it limits his discussion of particularly thorny questions (e.g., the relationship of a Catholic college to a diocesan bishop). The book is sure to be popular with Notre Dame graduates, and Part 2 of the book should be studied by any junior faculty member who would hope to receive tenure.ADavid I. Fulton, Coll. of Saint Elizabeth, Morristown, NJ
Copyright 1999 Reed Business Information, Inc.

Monk's Reflections: A View from the Dome [Hardcover] C.S.C. Malloy, Edward A.

Monk*s Reflections: A View from the Dome

Shipping: US$ 31.22
From United Kingdom to U.S.A.
Destination, rates & speeds