Items related to The Flash Animator 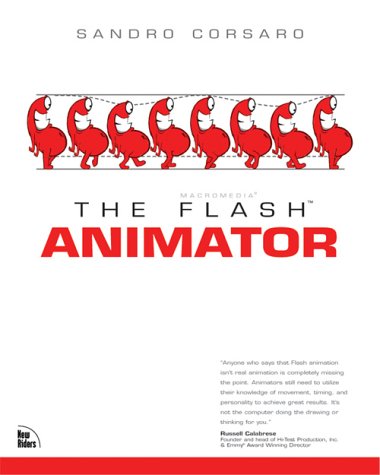 Intrigued by digital animation? Know a little bit about Macromedia Flash but are ready to take it to the next level? The Flash Animator will teach you how to create traditional-looking animations faster, cheaper, and with more delivery options. Sandro Corsaro helps you to develop a solid understanding of the principles of traditional animation, and then guides you step by step through bringing those principles to life with Macromedia Flash. Topics range from creating basic ball bounces to managing complex character design, sound, and optimization issues.

Interviews with numerous experts in the animation industry-complete with beautiful artwork and insights from feature-film animators and web pioneers-are included to inspire you along your Macromedia Flash animation path. Interviewees include: Iwoa Takamoto, creator of Scooby Doo; Brad Abelson, storyboard artist, The Simpsons; Joe Shields, Joe Cartoon; Tom Winkler, Doodie.com; and many other influential animators.

This book's CD contains all source files for the book's examples, exclusive animation files, and bonus Macromedia Flash cartoons. There is also an in-depth audio interview with Iwoa Takamoto.

Specializing in pure Macromedia Flash animation, Sandro Corsaro has created projects for clients such as Intel, McDonalds, MCA Records, Nestle, and emusic. Currently based in Los Angeles, he finds time for personal projects between commercial assignments and teaching Flash animation seminars nationwide. In his hometown of Los Angeles, he has given seminars for the Art Center in Pasadena and for Lynda's Ojai Digital Art Center.

Sandro was Lead Animator during the design phase of the award-winning Flash web site Rampt. His first short film for Rampt, Witness the End, was drawn entirely in Flash and earned him a nomination for Best Motion Graphics at FlashForward 2000 in New York. He has also earned Flash design and animation accolades from Print magazine, Shockwave, The Bandies, and Flash Planet, among others.

Prior to his introduction to Flash, Sandro earned degrees in both Fine Arts and Animation from the University of Southern California. At the USC Film school, he honed his traditional animation skills under the influences of great animation directors such as Tom Sito and Brad Bird. While still in college, he had the pleasure of working on the production side of two animated feature films for Warner Bros.-The Iron Giant and Osmosis Jones.

Sandro was first exposed to Flash while working as a character designer at the Information Sciences Institute. He soon developed a streamlined workflow that translated his traditional skills in order to produce dynamic Flash animation for the web and broadcast environment.