Items related to Writing at the kitchen table: The authorized biography...

Cooper, Artemis Writing at the kitchen table: The authorized biography of Elizabeth David

Writing at the kitchen table: The authorized biography of Elizabeth David 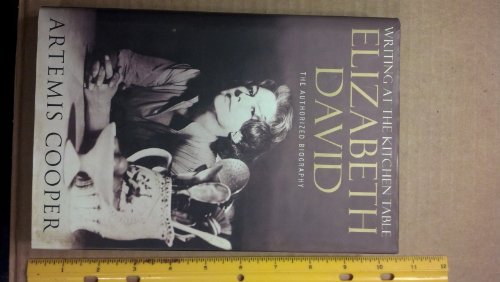 Although Elizabeth David was the very opposite of a recluse, she was famously reluctant to divulge information about herself to her readers, claiming that everything that needed to be said could be found in her books. In light of Artemis Cooper's Writing at the Kitchen Table, this assertion looks more doubtful than ever: the more that is revealed about David, the more interesting she becomes. Cooper is the "authorized" biographer, writing with access to a mass of personal papers, but this is no hagiography. Mrs. David, crisply but sympathetically drawn in these pages, was a fascinating egotist, beautiful with a hard sensuality, generous but capable of furious rages and lasting grudges. She learned a valuable lesson in self-centeredness from the quintessentially louche Norman Douglas, who in many ways seems to have been a key influence. Clearly she was not exactly a nice person, although it is encouraging (and not entirely surprising) to discover she had a really dirty laugh--more of a cackle, it appears.

The story is well told: the patrician background she flouted (but not too much); the flight from England, grayness, and failure; the rackety wartime years spent knocking around the Mediterranean in the company of high bohemians such as Lawrence Durrell; the marriage of convenience in Cairo that gave her the status of a married woman but was soon abandoned; the lovers; the return to London and the start of a dazzling writing career; the fame and the status; the shop; the stroke that affected both palate and libido; the troubled later years. On none of this need she be judged, and Cooper does not. In a sense, David was right. The best of her is in the writing--namely, in her precise, attentive, sensual appreciation of food and cooking. She was above all an exquisitely skillful cook, whose influence, though mostly indirect, has been incalculable. It's all the more moving, then, to learn at her funeral, "among the wreaths and baskets of flowers, and the violets she loved, someone had left a loaf of bread and a bunch of herbs tied up in brown paper." --Robin Davidson

Artemis Cooper is the author of Cairo in the War 1939-1945 and Paris after the Liberation (which she cowrote with her husband, Antony Beevor). They have two children and live in London.

Writing at the kitchen table: The authorized biography of Elizabeth David Cooper, Artemis