Items related to The Hunger 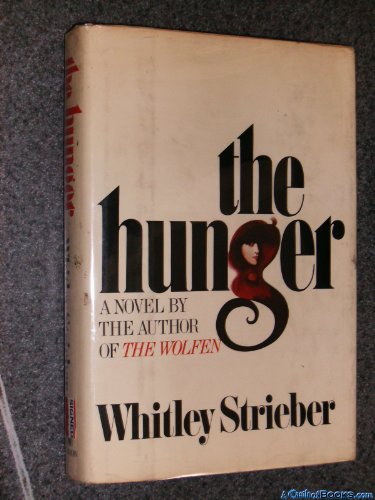 Whitley Strieber is widely known for his bestselling account of his own close encounter, Communion: A True Story, and has produced a television special based on Confirmation for NBC. He is also the author of the vampire novels The Hunger, The Last Vampire, and Lilith's Dream, and is the new host of his own radio program, Dreamland, founded by Art and Ramona Bell. His website -- the world's most popular site featuring topics at the edge of science and culture -- is www.unknowncountry.com.

She hated the city and hated it most in August. The streets burst with filthy life; rats and flies and the sneering, diseased poor of the Empire. Carts piled with everything from sausages to silks poured through the gates, choked the narrow alleyways, jammed into the forums. Exotic crowds from the edges of the world shoved and brawled and stole in every corner. Over it all a blue haze of smoke from countless sausage-stands and bakeries hung like dead fog. Rome was drowning in humanity: naked slaves, nobility preceded by lictors and followed by streams of clients, soldiers in creaking leather and clanging brass, aristocratic ladies held above the mass on litters, all surging around the gaudily painted temples of government, religion and wealth.

She drove her chariot like a centurion. Two slaves walked ahead of the horse and chariot with whips to force the crowd aside -- she didn't give a damn how it made her look, she had no time for the effete ministrations of lictors with their delicate rods. She was in a hurry and Rome was just going to have to move.

As she proceeded along the Nova Via toward the Appian Way the crowds thinned somewhat; nobody was going out the Capenian Gate today.

The lush palaces on the Palatine Hill and the brightly painted Temple of Apollo disappeared behind her. Now her slaves were trotting. Soon she would flail her horse and burst past them. She was growing frantic, the heat made time short.

On this day she would find one of the strongest men on earth and make him her own. She passed under the Appian Aqueduct and through the Capenian Gate. Now that she was outside she thrashed the horse, rattling past the Temple of Honor and Virtue and over a little hill. With shocking suddenness the horror was before her.

Even in this age of cheap life it stunned her.

A dense, roaring mass of flies darkened the sun. Lining the Appian Way for miles, rising and falling over the gentle Campagnian Hills, were twin rows of crosses. The entire army of the slave rebel called Spartacus was being executed. They had been here for three days. The question was, could she find one still living?

Such a man would have to be incredibly strong. Miriam's father had theorized that selecting only the very strongest might be the solution to their problem. In the past they had too often chosen badly, and the transformed had always died.

Miriam needed this man. She longed for him, dreamed about him. And now she arranged her veils to keep out the flies and prodded her horse to find him. The shadows of morning stretched before the crosses. At least Miriam was alone on the road; travelers were detouring along the Ardenian Way as far as Capua in order to avoid this disgusting mess. Miriam's slaves came up behind her, gasping from their run out from the city, batting at the flies that settled around them. Her horse snorted nervously as flies alighted on its face.

"Groom," she said, motioning with her hand. Her slaves had wrapped themselves in cotton soaked with gall. The groom came forward. For an instant his costume reminded her of better times, when she had watched the people of the desert going forth in the sun with similar turbans on their heads. In those days her family had been nomadic, traveling up and down the desert, capturing strays on the fringes of Egypt's fertile plain.

She moved slowly ahead, enduring the sweet stench and the ceaseless energy of the flies, past corpse after corpse. A knot of loathing burned in her stomach. Rome was madness enthroned. And it would get worse. The city's rise to a world-empire was now inevitable. In time it would pass, but not soon. Many hard years lay ahead.

Every few minutes she stopped, lifted her veils, and stared long at one of the victims. With a flick of her wrist she would send a slave to test him by prodding him in the ribs with a stick. A feeble groan would be the only protest and she would continue on. Behind her one of her slaves had begun to play a flute to soften the ordeal. He played the plaintive music of Egypt, sad notes well suited to the situation.

She noticed one man from a long way off and stopped a moment to watch him. There was organization to his movements. Tied to a cross, a man must keep his legs straight or suffocate. To stay alive takes every human resource. Only sheer terror of death keeps a man struggling on a cross.

This man must have been at it steadily for nearly seventy-two hours. Yet he must realize that nobody was going to have mercy on him.

She clapped softly to signal the groom. It was all she could do not to whip the horse to a gallop, but then her slaves would have to run again. She was no Roman, she despised indifferent cruelty. So they walked to the prize. As they drew closer she saw that he was Greek or Middle Eastern, filthy and brutally wounded from whipping. His eyes were closed, his face almost peaceful in the extremity of his effort.

The next moment he straightened his legs and she heard an awful, ponderous intake of breath. Then the legs slacked again. One eye had opened a little, staring down at the approaching observers. But he was beyond caring about them, all his energy was devoted to his struggle.

He did it again without a cry or moan, and settled as quickly as he had risen. Then she noticed that his feet were moving back and forth beneath their seething mass of flies. He was actually trying to loosen his bonds!

And the flies were eating the blood on his ankles.

"Demetrius, Brusus, take him down!"

Two of her slaves ran to the cross and began shaking it, removing it from the ground. The man on the cross grimaced, showing his teeth.

"Be careful, you're hurting him."

They lowered the cross and she dismounted her chariot and ran to him. She ignored a distant noise, the clatter of hooves. There was no time to worry about soldiers now. She had gall and vinegar, and bathed his face with the liquids while the slaves untied him. The damage was appalling, there were even nests of maggots in his ears. His skin was cracked and black, his body bloated. Only the shallow rattling breath told her that he lived -- that and the open eye.

He stared at her. She spoke as soothingly to him as she would to a son. The eye unsettled her. It was incredible that he could be so alert after such an ordeal.

She looked up. Standing like sentinels of death were three soldiers with drawn short swords. They were in the middle of the road, almost hidden by the clouds of flies. These soldiers guarded the crosses, their mission to see that nobody took down any of the condemned. Not a few might try. Motives were many -- relatives, sympathizers, slavers after the quick profits of contraband.

He groaned when he was moved. Her slaves laid him with his knees to his chin on the floor of the chariot. There was no time to lose; even as she stepped up and grabbed the reins, the soldiers were coming forward. "Tell them I'm Crassus' wife," she said to her groom. The lie would make them hesitate. Roman soldiers would never impede the activities of the wife of Rome's current dictator. She snapped the reins and the horse broke into a gallop. She would allow it to gallop back to Rome; by now Victrix was desperate to return to her stall. As for the six slaves, they would make their way home more slowly. No doubt they would convince the soldiers of their innocence, they were sophisticated Egyptians and the troopers were only simple boys from Latium.

The man screamed when the chariot jerked and Miriam screamed with him. He was such an incredible find, it would be utterly desolating to kill him while trying to save him.

She had searched half the world for a man such as this, who clutched life with every whisper of strength.

They reached the Temple of Mars and she swung off the Appian Way. There was no sense in returning through the Capenian Gate; it would be certain to arouse the suspicion of the guard. She drove around the temple on a carter's track, moving close beneath the city wall. There were huts and holes in the shadow of the wall, and the track was stinking and awash in sewage. Floating in it were corpses in every state of decomposition. Dozens of people of every race on earth huddled on both sides of the track, migrants who had come to Rome only to find that strict laws controlled their right to enter the city. If they were not citizens, enrolled freedmen or slaves they could not pass through the gates. A woman came forward brandishing a stick. Miriam showed the short sword that was scabbarded on the chariot. Most of these people were extremely weak and would be unable to subdue her, much less stop the horse.

There was a motionless mass of carts and wagons at the Naevian Gate. Miriam whipped the horse ahead. It was best to take advantage of any confusion.

She used her voice and her whip liberally, thrashing carters and their horses out of the way and making the soldiers guarding the gate roar with laughter. Nevertheless, her efforts got her through quickly, and the condition of her passenger made her desperate for haste. Nobody looked into the bundle on the floor of the chariot.

She passed the Circus Maximus and wheeled toward the Quadrata, an area of wealthy mansions and luxurious insulae. Miriam owned the Insula Ianiculensis and lived on the ground floor. Her upstairs rents paid her taxes and left her enough to maintain her apartments, a villa at Herculaneum and fifty slaves. Hers was a modestly well-to-do establishment, comfortable enough but unlikely to attract any notice.

She found her way through the labyrinth of side streets behind the Circus. Soon the Aemilian Bridge appeared and she crossed it into the stillness of the Quadrata. At this time of year the suburb was quiet, its inhabitants away at Capua or Pompeii for the summer.

At last she arrived at the Insula Ianiculensis. As soon as she came around the corner slaves rushed out, a stable boy taking the reins of the exhausted horse as the assistant master of conveyances stepped up to the chariot. Her Egyptian physicians came forward a...