Items related to Audubon: Life and Art in the American Wilderness

Streshinsky, Shirley Audubon: Life and Art in the American Wilderness

Audubon: Life and Art in the American Wilderness 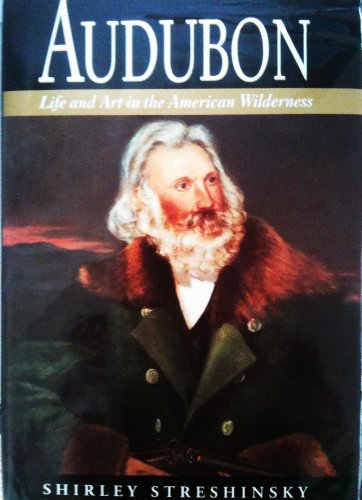 A profile of the Haitian-born French artist recounts Audubon's arrival in New York, his expeditions into the American wilderness, and his portraits of native American birds and animals. 20,000 first printing. $20,000 ad/promo.

Born Jean Rabin in France, John James Audubon made a name for himself in the New World almost in spite of himself. A failure at business, a footloose and difficult man, he perpetually fought off poverty to establish himself as a painter of America's fabulously varied wildlife. (To support himself while gathering the materials for his famous Birds of America, he painted portraits of New Orleans society ladies.) In this thoroughly researched and well-written biography, Shirley Streshinsky supplies little-known details about Audubon's early years and later tribulations, which were rewarded late in his life by widespread fame and the recognition of his singular contributions to early American science.

Fiction writer Streshinsky (The Shores of Paradise, 1991, etc.) brings her storytelling skills to bear on this accomplished biography of the famous painter of birds. Audubon (1778-1851), a prolific letter-writer and journal- keeper, left an enormous paper trail; although much of it was destroyed by a protective granddaughter, the remaining papers are rich in detail. Drawing on them, Streshinsky tell us that the artist emigrated to America from France in 1803 at the age of 18 and promptly fell in love with both the American wilderness and Lucy Bakewell, his future wife. By the early 1820's, as a failed businessman but expert woodsman, naturalist, and artist, he launched his plan to publish a book illustrating all the birds of America. He roamed the wilderness for several years and, by 1826, had sufficient paintings to go to England in search of a publisher. Audubon traveled through England, Scotland, and France, selling subscriptions to the proposed book, working with the engravers and colorists who reproduced his paintings, and painting furiously. Publication of The Birds of America and his Ornithological Biography brought him recognition and a measure of financial security, though he died before completing the illustrations for The Quadrupeds of America. Streshinsky quotes liberally from Audubon's writings, especially from his journals of the 1820's, when he was separated from his family. The picture that emerges is of a charming, hard-working, sometimes vain and petulant man with a intense love of nature. Surprising to many will be his letters from England begging that newly discovered birds be preserved in whiskey and shipped across the Atlantic to him. A well-modulated biography filled with details of frontier America, 19th-century publishing, scientific and artistic rivalries, and the striking differences between the cultures of the Old and New Worlds. (Sixteen pages of photographs--not seen) -- Copyright ©1993, Kirkus Associates, LP. All rights reserved.

Audubon: Life and Art in the American Wilderness

AUDUBON : Life and Art in the American Wilderness

Book Description Hardcover. Condition: New. Dust Jacket Condition: Fine. First Edition, 2nd Printing. BRAND NEW Copy. First Edition, 2nd Printing. Biography of dominant wildlife artist and naturalist John James Audubon (1785 - 1851) whose life-size prints in Birds of America (first published in England) remains a standard in ornithology, and whose name is synonymous with conservation. Born in modern day Haiti, young Audubon arrived in America at the age of eighteen. A passionate and steadfast frontiersman he devoted decades documenting American birds in the wild, always qualifying his paintings with "drawm from nature by J.J Audubon". This biography is a story of an admirable, adventurous, and dramatic life that rose above adversity. Fine copy. Seller Inventory # 006943

AUDUBON: LIFE AND ART IN THE AME