Items related to GREAT TIME COMING: The Life Of Jackie Robinson From... 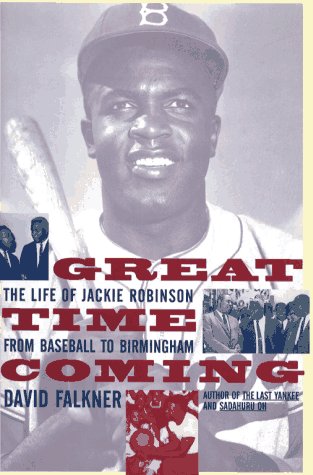 Chronicles the life of Jackie Robinson, revealing previously unexamined efforts that make him more than a symbolic hero of the civil rights movement and showing the real person behind the saintly image

David Falkner is the author of several books, including The Last Yankee and Nine Sides of the Diamond. A special contributor to The Sporting News, Falkner lives in New York City.

Common wisdom has it that Jackie Robinson, the first African American to play major-league baseball, was the perfect man for a superhuman job. Falkner's biography of the Brooklyn Dodger Hall of Famer examines this premise in detail, attempting to determine what made Robinson "perfect." Much of what he finds--and chronicles in lively fashion--has been observed many times before: Robinson was a superb athlete, in football and track as well as baseball; he came from a strong, closely knit family headed by a proud matriarch who instilled in her children a desire to succeed in whatever endeavor they undertook; he was college educated and had lived among white people all his life; and he had demonstrated repeatedly, especially as an officer in the army, that he could not be intimidated. What Falkner adds to this familiar portrait of Robinson's character is an emphasis on the man's own sense of history. Not only did Robinson understand the responsibility of being the first black player, he also recognized that he had to prove to the world that others should follow him. Falkner, whose biography of Japanese baseball star Sadaharu Oh remains among the best sports books ever, portrays Robinson as a man who, in trying to make a living in an unjust society, found himself cast as the lead in a social revolution. Though Robinson wasn't born to the task, he quickly realized its burdens and carried them throughout his life. Robinson's heroism, Falkner makes clear, is that he became the perfect man for the job through intelligence and character. Highly recommended for every public library. Wes Lukowsky

Great Time Coming: The Life of Jackie Robinson, from Baseball to Birmingham