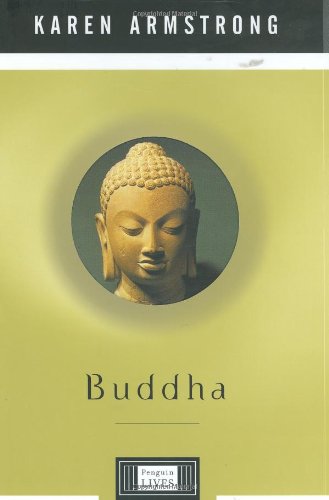 The author of The Battle for God and other works on religion focuses her attention on the Buddha, retracing his life from prince to savior of humankind.

Books on Buddhism may overflow the shelves, but the life story of the Buddha himself has remained obscure despite over 2,500 years of influence on millions of people around the world. In an attempt to rectify this, and to make the Buddha and Buddhism accessible to Westerners, the beloved scholar and author of such sweeping religious studies as A History of God has written a readable, sophisticated, and somewhat unconventional biography of one of the most influential people of all time. Buddha himself fought against the cult of personality, and the Buddhist scriptures were faithful, giving few details of his life and personality. Karen Armstrong mines these early scriptures, as well as later biographies, then fleshes the story out with an explanation of the cultural landscape of the 6th century B.C., creating a deft blend of biography, history, philosophy, and mythology.

At the age of 29, Siddhartha Gautama walked away from the insulated pleasure palace that had been his home and joined a growing force of wandering monks searching for spiritual enlightenment during an age of upheaval. Armstrong traces Gautama's journey through yoga and asceticism and grounds it in the varied religious teachings of the time. In many parts of the world during this so-called axial age, new religions were developing as a response to growing urbanization and market forces. Yet each shared a common impulse--they placed faith increasingly on the individual who was to seek inner depth rather than magical control. Taoism and Confucianism, Hinduism, monotheism in the Middle East and Iran, and Greek rationalism were all emerging as Gautama made his determined way towards enlightenment under the boddhi tree and during the next 45 years that he spent teaching along the banks of the Ganges. Armstrong, in her intelligent and clarifying style, is quick to point out the Buddha's relevance to our own time of transition, struggle, and spiritual void in both his approach--which was based on skepticism and empiricism--and his teachings.

Despite the lack of typical historical documentation, Armstrong has written a rich and revealing description of both a unique time in history and an unusual man. Buddha is a terrific primer for those interested in the origins and fundamentals of Buddhism. --Lesley Reed

Karen Armstrong's books include The Battle for God, A History of God: The 4000-Year Quest of Judaism, Christianity, and Islam; Jerusalem: One City, Three Faiths; and In the Beginning: A New Interpretation of Genesis. A former Roman Catholic nun, she teaches at Leo Baeck College for the Study of Judaism and received the 1999 Muslim Public Affairs Council Media Award.