Items related to Haroun and the Sea of Stories

Rushdie, Salman Haroun and the Sea of Stories 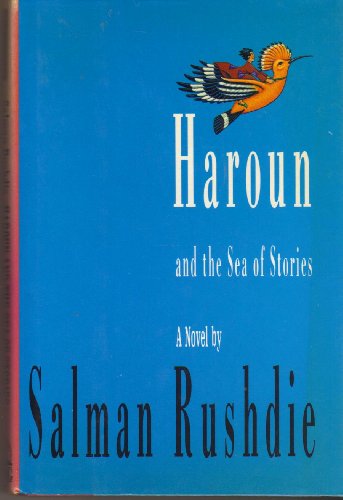 Abandoned by his wife, professional storyteller Shah of Blah suffers further insult when he loses his gift for gab, and his courageous son sets out to restore his former talents

Review:
Immediately forget any preconceptions you may have about Salman Rushdie and the controversy that has swirled around his million-dollar head. You should instead know that he is one of the best contemporary writers of fables and parables, from any culture. Haroun and the Sea of Stories is a delightful tale about a storyteller who loses his skill and a struggle against mysterious forces attempting to block the seas of inspiration from which all stories are derived. Here's a representative passage about the sources and power of inspiration:

So Iff the water genie told Haroun about the Ocean of the Stream of Stories, and even though he was full of a sense of hopelessness and failure the magic of the Ocean began to have an effect on Haroun. He looked into the water and saw that it was made up of a thousand thousand thousand and one different currents, each one a different colour, weaving in and out of one another like a liquid tapestry of breathtaking complexity; and Iff explained that these were the Streams of Story, that each coloured strand represented and contained a single tale. Different parts of the Ocean contained different sorts of stories, and as all the stories that had ever been told and many that were still in the process of being invented could be found here, the Ocean of the Streams of Story was in fact the biggest library in the universe. And because the stories were held here in fluid form, they retained the ability to change, to become new versions of themselves, to join up with other stories and so become yet other stories; so that unlike a library of books, the Ocean of the Streams of Story was much more than a storeroom of yarns. It was not dead, but alive.

"And if you are very, very careful, or very, very highly skilled, you can dip a cup into the Ocean," Iff told Haroun, "like so," and here he produced a little golden cup from another of his waistcoat pockets, "and you can fill it with water from a single, pure Stream of Story, like so," as he did precisely that.

About the Author:
Salman Rushdie is the author of eleven novels—Grimus, Midnight’s Children (for which he won the Booker Prize and the Best of the Booker), Shame, The Satanic Verses, Haroun and the Sea of Stories, The Moor’s Last Sigh, The Ground Beneath Her Feet, Fury, Shalimar the Clown, The Enchantress of Florence, and Luka and the Fire of Life—and one collection of short stories: East, West. He has also published three works of nonfiction: The Jaguar Smile, Imaginary Homelands: Essays and Criticism 1981–1991, and Step Across This Line, coedited two anthologies, Mirrorwork and Best American Short Stories 2008, and published Joseph Anton: A Memoir. His numerous literary prizes include the Booker Prize for Midnight's Children and the Whitbread Prize for The Satanic Verses.

Jessica Hische is a letterer, illustrator, typographer, and web designer. She currently serves on the Type Directors Club board of directors, has been named a Forbes Magazine "30 under 30" in art and design as well as an ADC Young Gun and one of Print Magazine’s "New Visual Artists". She has designed for Wes Anderson, McSweeney's, Tiffany & Co, Penguin Books and many others. She resides primarily in San Francisco, occasionally in Brooklyn.

HAROUN AND THE SEA OF STORIES