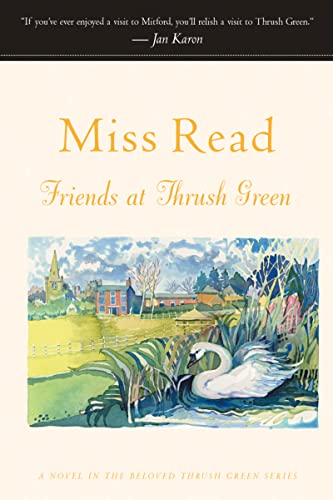 Ever since the publication of Village School 35 years ago, Miss Read's numerous novels set in Thrush Green and Fairacre have been bestsellers all over the world. The "new Miss Read" focuses on Thrush Green's two former schoolteachers, now retired, who return for a visit.

Miss Read (1913-2012) was the pseudonym of Mrs. Dora Saint, a former schoolteacher beloved for her novels of English rural life, especially those set in the fictional villages of Thrush Green and Fairacre. The first of these, Village School, was published in 1955, and Miss Read continued to write until her retirement in 1996. In the 1998, she was awarded an MBE, or Member of the Order of the British Empire, for her services to literature.

From Kirkus Reviews:
Miss Read's 34th Thrush Green idyll, illustrated as always by the gentle sketches of genteel chaps and aging lassies of John S. Goodall. What's new now in that English never-never land of secure, truly decent (albeit with a handful of manageable exceptions) country men and women, where no one lacks help or a haven in tribulation? Well, there's a new neighbor, the incoming schoolmaster and his mysteriously perennially ill wife. Mysterious, until it's general knowledge that she has a, uh, problem. Poor Violet Lovelock, youngest of the three antique Lovelock sisters, is in a highly nervous state since eldest sister Beatrice has been discovered popping scones at the Fuchsia Bush tea shop and has moved a considerable number of articles in her bedroom. And lonely farmer Percy (you remember he was disagreeable when schoolteacher Dorothy hit--not fatally--his dog with her new car) is quietly courting, and everyone thinks he's after young Doreen Lilly, who's home with mother and Doreen's fatherless tot. The vicar, the doctor, and all the good people rally round and things seem to be set right. Oh, yes, the retired schoolteachers, Dorothy and Agnes, visit now and then, and on one visit Agnes reveals the shocking news that Dorothy may have more than kindly inclinations toward elderly Teddy in their new village. Agnes fears the worst. More of the soothing same. Take a chapter or two before bedtime. -- Copyright ©1991, Kirkus Associates, LP. All rights reserved.