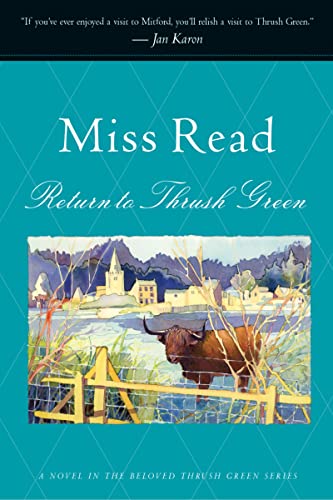 Miss Read's delightful chronicles of life in Thrush Green continue with RETURN TO THRUSH GREEN. It's spring again in the village, and with the change of the seasons comes change in the lives of many villagers. The Young family's tranquility is disrupted by the sudden arrival of Joan's father, while Molly and Ben Curdle consider putting an end to their wandering days in order to finally settle down. Even the reappearance of Sexton Albert Piggot -- one of Thrush Green's more malevolent sorts -- cannot dim the happiness that inevitably prevails at Thrush Green.

Miss Read (1913-2012) was the pseudonym of Mrs. Dora Saint, a former schoolteacher beloved for her novels of English rural life, especially those set in the fictional villages of Thrush Green and Fairacre. The first of these, Village School, was published in 1955, and Miss Read continued to write until her retirement in 1996. In the 1998, she was awarded an MBE, or Member of the Order of the British Empire, for her services to literature.