Items related to The Fabulist vol. 2 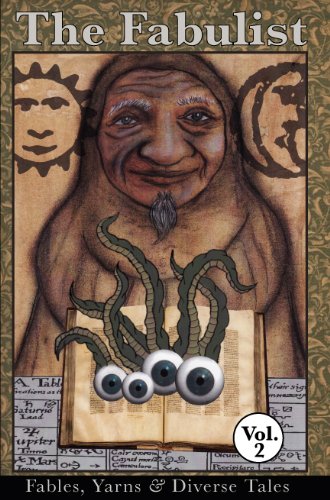 Is it fantasy, science fiction, or some new, far-out flavor? The Fabulist Magazine presents a platter of post-genre prose and verse, plus savory, sweet and seasonal art and illustration, cooked up from a stone soup of fables, yarns, myths, history, dreams, satire, high tech and pop culture.

About the Author:
Tantra Bensko has been published by The Journal of Experimental Fiction, Fiction International, Evergreen Review, Mad Hatters Review, Bewildering Stories, Rose and Thorn, and Cezanne's Carrot. Stop! Before It s Too Late (c) 2008 by Tantra Bensko

Tram Nguyen, a former editor of ColorLines Magazine, is the author of We Are All Suspects Now: Untold Stories From Immigrant Communities After 9/11 (Beacon). Her coverage of civil liberties earned her a New California Media Award in 2003. Khoa in Chiapas (c) 2008 by Tram Nguyen

Mary Austin Fuller, an accomplished artist and illustrator, works by day as a nonprofit development director, and is a longtime arts advocate and administrator. In Mexico (c) 2010 by Mary Austin Fuller

Steve Moore currently lives in North Carolina with his wife and daughter. He holds degrees in mathematics and physics, but has spent the last four years researching parapsychology and cognitive science. Incident at Oscuro (c) 2009 by Steve Moore

Michael C. Keith is the author of several books, articles, and stories. He teaches Communication at Boston College. Losing His Head (c) 2009 by Michael C. Keith

Jeremy Adam Smith is the founding editor of Shareable Magazine, the author of The Daddy Shift, and a Knight Fellow at Stanford University. His novella The Wreck of the Grampus was an honorable mention in The Year s Best Science Fiction (Tor, 2009), edited by Gardner Dozois. Centaur in Brass 2041 (c) 2009 by Jeremy Adam Smith

Adam Myers, house illustrator for The Fabulist, is an artist, writer and educator based in South Korea, San Francisco, and Western Pennsylvania. Mawulf Sees the World (c) 2009 by Adam Myers 128

Bosley Gravel was born in the Midwest, and came of age in Texas and southern New Mexico. He has worked numerous dead end jobs, and now makes a living working on computer networks. He has been making up stories from an early age, and from time to time they end up on paper. Tintamarre-ruckus-bedlam-pother-and-brawl, Behave! (c) 2009 by Bosley Gravel

Josh Wilson is The Fabulist s proofreader and website manager. A winner of the Society of Professional Journalists Excellence in Journalism Award, he lives in San Francisco with his wife and their infant daughter. Magic Mirror (c) 2005 by Josh Wilson

Holly Day is a writer and educator living in Minneapolis, Minnesota, with her husband and two children. Her recent nonfiction books include Music Theory for Dummies, Music Composition for Dummies, and Walking Twin Cities. Finding Me Hesitant (c) 2009 by Holly Day

Shipping: US$ 12.29
From United Kingdom to U.S.A.
Destination, rates & speeds