Items related to The Night Inspector 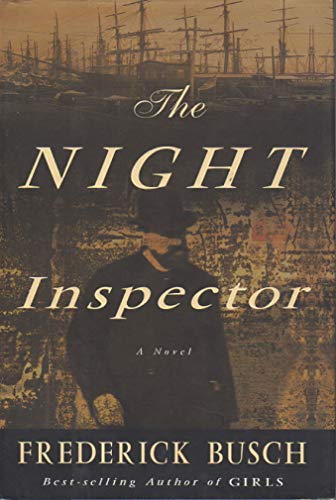 A haunting story told with insight and powerful language, The Night Inspector chronicles an unforgettable character who navigates the desperate days and sleepless nights of a gilded yet polluted nineteenth-century New York.

William Bartholomew, a maimed veteran of the Civil War, returns from the battlefields to New York City a hardened man, bent on reversing his fortunes. Much of the lower half of his face was torn apart when he was felled by enemy fire, and he is forced to wear a mask in his postwar life as a New York financial speculator. Despite the solitude of his past life, Bartholomew, once a deadly sniper, now lives among all manner of slum dwellers, thieves, and murderers. As he prowls the city, he becomes involved with Jessie, a Creole prostitute who engages him in a venture that has its origins in the complexities and despair of the Civil War. And he befriends a deputy inspector of customs named Herman Melville--who, largely forgotten as a writer, is condemned to live in the wake of his vanished literary success and in the turmoil of his fractured family.

As with his other works, Frederick Busch leaves us breathless with the mastery of his prose and the power of his storytelling. But never before has he delved the depths of this country's heart and soul as magnificently as he does with The Night Inspector. His depictions of the Civil War are harrowing as we witness the mayhem of battle through a marksman's eyes. It is a gripping portrait--of a nation trying to heal from the ravages of war, of the desolation of a people searching for hope in the burgeoning of a new age, and of one man's attempts at recapturing a taste for life through the surging currents of his own emotions, ambitions, and conscience.

Review:
In his fiction, at least, Frederick Busch is no stranger to the Victorian era: his 1978 novel The Mutual Friend was a meticulous reconstruction of the Dickensian universe, right down to the last wisp of pea-soup fog. In The Night Inspector, he ventures an equally deep immersion in the past. This time, however, Busch takes us to post-Civil-War Manhattan, where a disfigured veteran named William Bartholomew rages against the Gilded Age--even as he demands remuneration for his own losses.

And what exactly has the narrator lost? As we learn in a sequence of flashbacks, Bartholomew served as a Union sniper, picking off stray Confederate soldiers in an extended bout of psychological warfare. Eventually, though, he received a taste of his own medicine, when a enemy bullet destroyed most of his face. Outfitted with an eerie papier-mâché mask, Bartholomew tends to shock postwar observers into silence:

I imagine I understand their reaction: the bright white mask, its profound deadness, the living eyes beneath--within--the holes, the sketched brows and gashed mouth, airholes embellished, a painting of a nose.... Nevertheless. I won this on your behalf, I am tempted to cry, or pretend to. The specie of the nation, the coin of the realm, our dyspeptic economy, the glister and gauge of American gold: I was hired to wear it!

Bartholomew has, it should be obvious, a formidable mastery of rhetoric. It's appropriate, then, that he should hook up with that supreme exponent of the American baroque, Herman Melville--who at this point is a burnt-out customs inspector (and candidate for some Victorian 12-step plan). Together these outcasts embark upon a plan to rescue a group of black children from their Florida servitude. This caper--along with Bartholomew's attachment to a gold-hearted, elaborately tattooed prostitute--allows the novel to veer in the direction of the penny dreadful. Yet Busch's mastery of period detail, and of the very shape of century-old syntax, remains extraordinary on every page. And true to its title, The Night Inspector is a superb investigation of darkness--in both the physical and psychological sense. "I was reckless," the narrator insists, "and born with great vision though not, alas, of the interior, spiritual sort." By the end of the novel, most readers will decide that he's undersold himself. --Bob Brandeis
From the Back Cover:
"Frederick Busch is a superb writer, a skilled artist and poet in every line he writes. Girls is a splendid accomplishment. I could not stop reading this book. Busch writes with a constrained power that is the mark of a master. . . . This is all the stuff of a major writer, one who I believe has created a crime novel that will rank with the best in American literature. This man's gift and skill are enormous."
--James Lee Burke

"When a book is this successful, it's impossible to detect any sign of artistic struggle. The narrative seems to unfold with a miraculous and thrilling ease. The highest compliment a reader can pay a literary thriller or any novel, for that matter, is to claim that the book is nearly as intricate and mysterious as life itself, that the reader has lived in the book as if it were a particularly lifelike dream, and cared about its characters as if they were real. All these claims are true about Girls."
--Washington Post Book World

"Girls is about as close to perfect as a novel gets. Its prose is clean and strong but never advertises its own quiet brilliance, its characters are sharply defined and irresistible, and its plot is suspenseful enough to keep you up until dawn. Girls is an achievement, powerful and true."
--Anthony Brandt, Men's Journal