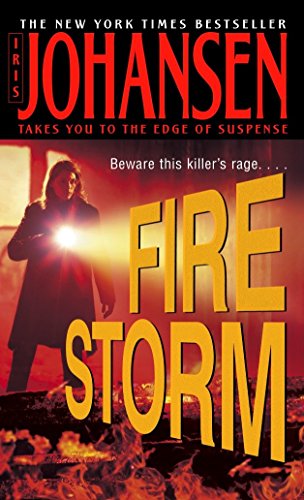 #1 New York Times bestselling author Iris Johansen turns up the heat in this explosive new psychological thriller. This time a gifted arson investigator teams up with a mysterious operative to stop a killer raging completely out of control...

For Kerry Murphy, the inferno is never far away. The flames of that long-ago night still burn in her nightmares: the heat, the choking smoke, the helplessness. She can never run fast enough...

Now Kerry works as an arson investigator with her evidence-sniffing dog, Sam. Together they're a great team, but her life is about to change in the time it takes to strike a match. The deadly flames of her past are back, and from out of the ashes a stranger appears. Who is Silver? And why has he chosen her in the desparate race to find a killer determined to ignite hell on earth? Kerry and Silver may not have a chance against a psychopath as coldhearted as his method is red-hot. To save themselves and the innocent lives at stake, Kerry will have to do what she hoped she'd never have to do: fight fire with fire.

Arson investigator Kerry Murphy has a unique talent for sniffing out the cause of fires like the one that killed her mother years ago. She also has a secret, known only to the mysterious stranger named Silver, a "consultant" who needs her cooperation in stopping the psychopath who burned his brother alive and who's holding national security hostage to his own demented ego. Silver has an uncanny gift for getting under Kerry's skin, which is both the good and bad news--good because it doubles their chances of finding the man behind the terrifying weapon of the title, and bad because Kerry can't afford to be vulnerable to Silver or any other man. Johansen has written a taut thriller that's not quite as combustible as its title but one that will keep readers fired up enough to stick with it to the last page. --Jane Adams

Iris Johansen is the New York Times bestselling author of many novels, including Killer Dreams, On the Run, Countdown, Firestorm, Fatal Tide, Dead Aim, and No One to Trust. She lives near Atlanta, Georgia.