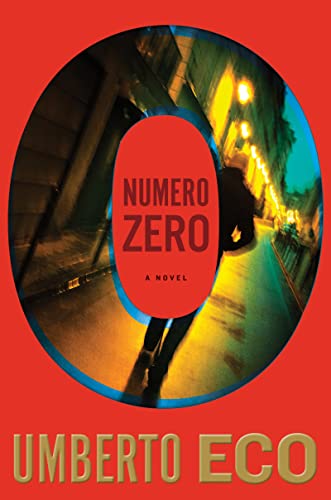 From the best-selling author of The Name of the Rose and The Prague Cemetery, a novel about the murky world of media politics, conspiracy, and murder

A newspaper committed to blackmail and mud slinging, rather than reporting the news.

A paranoid editor, walking through the streets of Milan, reconstructing fifty years of history against the backdrop of a plot involving the cadaver of Mussolini's double.

The murder of Pope John Paul I, the CIA, red terrorists handled by secret services, twenty years of bloodshed, and events that seem outlandish until the BBC proves them true.

A fragile love story between two born losers, a failed ghost writer, and a vulnerable girl, who specializes in celebrity gossip yet cries over the second movement of Beethoven’s Seventh. And then a dead body that suddenly appears in a back alley in Milan.

Set in 1992 and foreshadowing the mysteries and follies of the following twenty years, Numero Zero is a scintillating take on our times from the best-selling author of The Name of the Rose and Foucault's Pendulum.

From the Inside Flap:
From the best-selling author of The Name of the Rose, an enthralling new conspiracy thriller

1945, Lake Como. Mussolini and his mistress are captured and shot by local partisans. The precise circumstances of Il Duce s death remain controversial.

1992, Milan. Colonna, a depressed hack writer, is offered a fee he can t resist to ghostwrite a book. His subject: a fledgling newspaper, which happens to be financed by a powerful media magnate. As Colonna gets to know the team, he learns of the editor s paranoid theory that Mussolini s corpse was a body double and part of a wider Fascist plot. It s the scoop the newspaper desperately needs. The evidence? He s working on it.

It s all there: media hoaxes, Mafiosi, the CIA, the Pentagon, blackmail, love, gossip, and murder. A clash of forces that have shaped Italy since World War II from Mussolini to Berlusconi. Farcical, serious, satiric, and tragic (Le Point, France), Numero Zero is the work of a master storyteller.
"
From the Back Cover:
Numero Zero [is] . . . a smart puzzle and a delight. Kirkus Reviews (starred review)
"One of the most influential thinkers of our time." Los Angeles Times
Once the reader gets on the Eco carousel it s hard to get off. New York Times
"