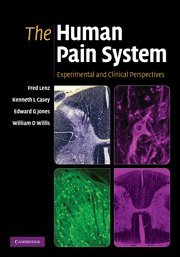 Book Description:
The development of rodent models and the publication of imaging, psychological and pharmacological studies in humans has put pain to the forefront of scientific and clinical research. The authors review the anatomy and physiology of nociception in monkeys and humans and provide a basis for interpreting these studies.
About the Author:
Edward G. Jones is the director of the Center for Neuroscience and distinguished professor of psychiatry at UC Davis in California. He is a Past President of the Society for Neuroscience and a member of the National Academy of Sciences and Chair of the Committee representing the US on the International Brain Research Organisation. He has been the recipient of numerous prestigious prizes. Professor Jones is an authority on brain anatomy and recognized as a leading researcher on the fundamental central nervous mechanisms underlying perception and cognition. He is also a distinguished historian of neuroscience.

Fred A. Lenz is A. Earl Walker Professor in the Department of Neurosurgery at the Johns Hopkins University, Baltimore, where he maintains a practice in epilepsy and functional neurosurgery. He has served on numerous study sections of the NIH and NAS, and on seven editorial boards. He has won the Grass Foundation Career Research Award of the Society of Neurological Surgeons.

William D. Willis is Professor Emeritus in the Department of Neuroscience and Cell Biology, University of Texas Medical Branch. He has been President of the American Pain Society and of the Society for Neuroscience, Chief Editor of the Journal of Neurophysiology and the Journal of Neuroscience. He has received the Kerr Memorial Award from the APS, the Bristol Myers Squibb Award, the Purdue Prize for Pain Research and the J. E. Purkinjie Honorary Medal for Merit in the Biological Sciences. He has been named one of the world's most highly cited authors (top 0.5%) by the Institute of Scientific Information.

Kenneth L. Casey is Professor Emeritus of Neurology and Molecular and Integrative Physiology at the University of Michigan. He is a Fellow of the American Academy of Neurology, an elected member of the American Neurological Association, a Lifetime Honorary and Founding Member of the International Association for the Study of Pain, and a Founding Member and Past President of the American Pain Society. Dr Casey's awards and lectureships include the F. W. L. Kerr Lectureship and Award from the APS. Dr Casey was among the first to investigate human pain with functional brain imaging.