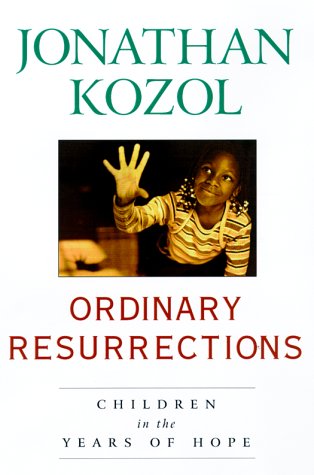 In a stirring departure from his earlier work, Jonathan Kozol has written his most personal and hopeful book to date, an energized and unexpected answer to the bleakness of Death at an Early Age, the prize-winning classic that he published more than 30 years ago.

Like his most recent book, Amazing Grace, this work also takes place in New York's South Bronx; but it is a markedly different book in mood and vantage point, because we see life this time through the eyes of children, not, as the author puts it, from the perspective of a grown-up man encumbered with a Harvard education. Here, too, we see devoted teachers in a good but underfunded public elementary school that manages, against all odds, to be a warm, inviting, and protective place; and we see the children also in the intimate religious setting of a church in which they are watched over by the vigilant grandmothers of the neighborhood and by a priest whose ministry is, first and foremost, to the very young.

A work of guarded optimism that avoids polemic and the fevered ideologies of partisan debate, Ordinary Resurrections is a book about the little miracles of stubbornly persistent innocence in children who are still unsoiled by the world and still can view their place within it without cynicism or despair. Sometimes playful, sometimes jubilantly funny, and sometimes profoundly sad, they're sensitive children, by and large -- complex and morally insightful -- and their ethical vitality denounces and subverts the racially charged labels that the world of grown-up expertise too frequently assigns to them.

The author's personal involvement with specific children deepens as the narrative evolves. A Jewish man, now 63 years old, he finds his own religious speculations growing interwoven with the moral and religious explorations of the children, some of whom have been his friends for nearly seven years. The children change, of course, from year to year as they learn more about the world; but the author is changed also by the generous and tender ways in which the children, step by step, unlock their secrets and unveil the mysteries of their belief to him.

Salvation in these stories comes not from the promises of politicians or the claims of sociology but from the ordinary resurrections that take place routinely in the hearts of children. "We all lie down," a theologian tells the author. "We all rise up. We do this every day." So, too, when given a fair chance, do many of the undervalued urban children of our nation. In this book, we see some beautiful children as they rise, and rise again.

Stepping back from his 30-year attack on the inequalities of education, Jonathan Kozol allows the children to speak for themselves in Ordinary Resurrections. These are the schoolchildren of South Bronx's most dismal neighborhood, Mott Haven, where social struggles with poverty and imprisoned fathers rate just under AIDS and asthma as the greatest threats to young lives. Yet, Kozol marvels, despair and bitterness don't come to mind when you meet 10-year-olds like Ariel, who "skips through life" and displays a healing tenderness to others at the church afterschool program that has become a living laboratory of sorts for Kozol since he wrote Savage Inequalities in 1996. This is "not the land of bad statistics but the land of licorice sticks and long division, candy bars and pencil sets," he writes. In recording conversations between these kids and each other, their teachers, caretakers, parents, and even himself, Kozol manages to move the adults to the periphery in order to let the children teach. There is no government data, no research conclusions, only a sense of hope and wonder at the resiliency of the young.

Kozol readily admits that he's due for a reflective moment. In his 60s, living alone, his parents seriously ill, he seeks safety in surrounding himself with children. He confesses that he's not a religious man, yet he finds himself overcoming his awkwardness with prayer, even bowing his head with the children at times. His writing in this moving account is among his most eloquent, as when he describes the gentle way in which a teacher tugs for the attention of a dreamy first-grader as if carefully unwrapping a small package that may be breakable. He captures the rhythm of the exchanges between teacher and student in a way that practically whispers to the reader. Ultimately, this is a book about healing that reveals more about the lives of children in poor neighborhoods--and Kozol--than any of his prizewinning books to date. --Jodi Mailander Farrell

"Ordinary Resurrections is a deeply moving and marvelous book. Jonathan Kozol has shared poetic and powerful stories of the poor children of Mott Haven who became a part of his life. I pray the truth and poignancy Kozol portrays here will move you to stand up for them with your votes and your voices."
--Marian Wright Edelman, President, The Children's Defense Fund

Book Description Hardcover. Condition: New. Save gas and on shipping consider another book from us so we can ship two at once. Seller Inventory # O-OrdinRessur-n

ORDINARY RESURRECTIONS: Children in the Years of Hope