Items related to Den of Lions: Memoirs of Seven Years 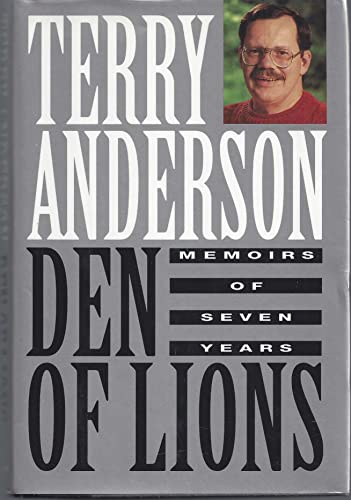 "Belongs on the shelf of classics about surviving degradation with dignity and even humor." Time
In March 1985, Terry Anderson was swept up in the violent conflict of a turbulent era. At the mercy of Shiite captors for nearly seven years, he lived in chains, wondering fearfully if each day would be his last. But his spirit soared beyond captivity, and he never gave up. Nor did those who loved him. And now, a free man again, he tells the harrowing and poignant story of a hostage's survival and final triumph.
From the Paperback edition.

Abridged from the memoirs of Terry Anderson, the Associated Press correspondent held hostage by Muslim fundamentalists for almost seven years, Den of Lions is a harrowing tale of physical and psychological deprivation and hardship. This audio adaptation achieves added poignancy through the interwoven narration of Anderson himself and his wife, Madeleine. Though the text reflects a journalist's integrity to the facts, an undertone of complex and conflicting emotions makes this first-hand account of Anderson's ordeal powerful and keenly felt. Terry and Madeleine Anderson take their audience on a unique journey not only through the battles that raged in the streets of Beirut, but the battles that waged within themselves as well. R.W.B. (c)AudioFile, Portland, Maine

Tremendously moving account by the AP's former Chief Middle East Correspondent of his 2,454 days as a hostage of the Islamic terrorist organization Hezbollah. Anderson's memoir comes fast after fellow hostage Brian Keenan's An Evil Cradling (p. 838) and complements it superbly. (A third hostage memoir, Terry Waite's Taken on Trust, is due out from Harcourt Brace in October but with no advance galleys.) Anderson shares neither Keenan's word-mastery nor his relentless focus on what goes on inside the hostage's cell, heart, and mind (Anderson's major attempts here at introspection, free-form poems that dot his text, are best overlooked). But the ex-reporter's plain and simple narration still packs a wallop and offers much deeper background on political maneuvers surrounding the hostage drama (including Oliver North and Ronald Reagan's respective roles)--with this background complemented by italicized reminiscences from Anderson's then- fiancee, Madeline Bassil. Anderson is also more frank than Keenan about the fluctuating condition of his fellow hostages (who for a time included Keenan himself), especially about squabbles (with up to five men chained into a tiny room, feuds sometimes lasted for weeks), as well as the madness that afflicted American hostage Frank Reed. Otherwise, the memoir at hand much parallels Keenan's: a litany of abuse, suffering, and despair; a paean to love, hope, and courage--which, in Anderson's case, finds its wrenching apexes on the day when Terry Waite, after four years in solitary, is led into Anderson's group of hostages; and on the day when Anderson, blindfolded, feels ``Someone [put] a hand on my shoulder'' and is told, `I'm a Syrian colonel. You're free.' '' That a man can spend seven years chained to a wall and less than two years later write such a lucid and compassionate memoir of his ordeal is a remarkable testament to humanity--as well as an unimpeachable indictment of the terrorism that chained his body but not his spirit. (Photographs--not seen) -- Copyright ©1993, Kirkus Associates, LP. All rights reserved.

Shipping: US$ 8.21
From United Kingdom to U.S.A.
Destination, rates & speeds