Items related to The Reenchantment of Art

Gablik, Suzi The Reenchantment of Art 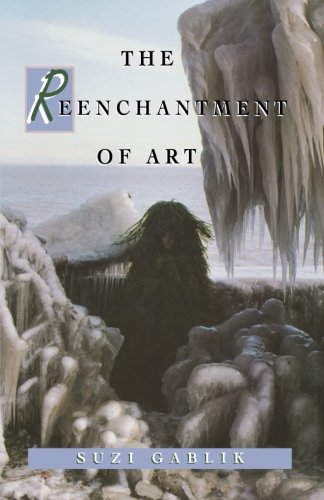 One of the livelier critics of the contemporary art scene (Has Modernism Failed?, 1984--not reviewed) tries to trace the roots of the present crisis in aesthetics and to map out some ways of escape. Gablik's thesis is not original. ``Since the Enlightenment,'' she maintains, ``our view of what is real has been organized around the hegemony of a technological and materialist world view...we no longer have any sense of having a soul.'' Spirituality and ritual have been the first casualties of this attitude, but the most profound reordering, Gablick says, has occurred in the area of social relations, as the spread of individualistic philosophies has weakened or destroyed the cohesion of traditional communal structures--leading to the modern artist understanding his or her vocation in terms of the objects created rather than the audience addressed. If the artist has any awareness of the audience at all, it is usually seen as a hostile force to be either ignored or shocked (this is the lesson Gablik draws from Richard Serra's Tilted Arc controversy). What is needed, we are told, is an aesthetics of ``interaction and connection,'' in which the artist works to restore the lost harmony between humanity and earth, and to override the alienation of race, sex, and class. At this point Gablik's argument falls into New Age obscurantism and is weakened further in that most of the exemplars of her approach (sculptors who design carts for the homeless, photographers who document toxic-waste dumping, etc.) sound more like social workers or advocacy lawyers than artists. A valuable analysis that brings forth incredible conclusions. Gablick has apparently fallen into a deconstructionist vocabulary that allows her to play fast-and-loose with concepts of ``art'' and ``creation,'' resulting in a confusion little better than the one she set out to overcome. (Thirty-two illustrations.) -- Copyright ©1991, Kirkus Associates, LP. All rights reserved.

The Reenchantment of Art (Paperback or Softback)

The Reenchantment of Art (Paperback)

Book Description Paperback. Condition: New. New edition. Language: English. Brand new Book. Suzi Gablik's last book, "Has Modernism Failed?", won readers with its passionate, scathing critique of an enervated contemporary art scene. Now "The Reenchantment of Art" describes her hope for a new art, born out of a new cultural paradigm embracing a revitalized sense of community, an enlarged ecological perspective, and access to mythic and archetypal sources of spiritual life. In the course of her argument, Gablik introduces the reader to a number of figures for whom this paradigm offers a fresh approach to making art: artists such as Fern Shaffer, who performs empowerment rituals to mark the seasonal equinoxes; David T. Hanson, Andy Goldsworthy and Rachel Rosenthal, whose work attempts to heal our wounded planet; and others such as Tim Rollins, Suzanne Lacy and Mierle Laderman Ukeles who address the gravest social issues. Seller Inventory # APC9780500276891

Shipping: US$ 20.52
From United Kingdom to U.S.A.
Destination, rates & speeds