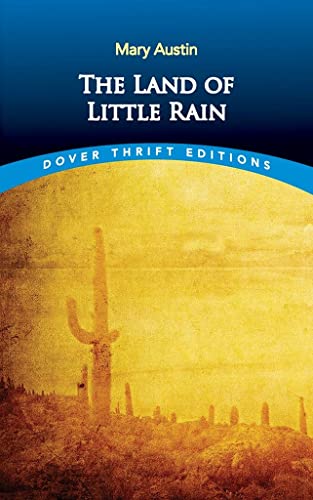 The enduring appeal of the desert is strikingly portrayed in this poetic study, which has become a classic of the American Southwest. First published in 1903, it is the work of Mary Austin (1868–1934), a prolific novelist, poet, critic, and playwright, who was also an ardent early feminist and champion of Indians and Spanish-Americans. She is best known today for this enchanting paean to the vast, arid, yet remarkably beautiful lands that lie east of the Sierra Nevadas, stretching south from Yosemite through Death Valley to the Mojave Desert.
Comprising fourteen sketches, the book describes plants, animals, mountains, birds, skies, Indians, prospectors, towns, and other aspects of the desert in serene, beautifully modulated prose that conveys the timeless cycles of life and death in a harsh land. Readers will never again think of the desert as a lifeless, barren environment but rather as a place of rare, austere beauty, rich in plant and animal life, weaving a lasting spell over its human inhabitants.

From the Inside Flap:
"Between the high Sierras south from Yosemite--east and south over a very great assemblage of broken ranges beyond Death Valley, and on illimitably into the Mojave Desert" is the territory that Mary Austin calls the Land of Little Rain. In this classic collection of meditations on the wonders of this region, Austin generously shares "such news of the land, of its trails and what is astir in them, as one lover of it can give to another." Her vivid writings capture the landscape--from burnt hills to sun-baked mesas--as well as the rich variety of plant and animal life, and the few human beings who inhabit the land, including cattlemen, miners, and Paiute Indians. This Modern Library Paperback Classic is set from the original 1903 edition.
About the Author:
A prolific author of fiction, poetry, and plays, Mary Hunter Austin (1868–1934) was a noted defender of the rights of women, Native Americans, and Spanish-Americans. One of the American Southwest's earliest nature writers, she collaborated on a book with photographer Ansel Adams, Taos Pueblo, and was active in community theater.

The Land of Little Rain

The Land of Little Rain

Shipping: US$ 7.82
From United Kingdom to U.S.A.
Destination, rates & speeds