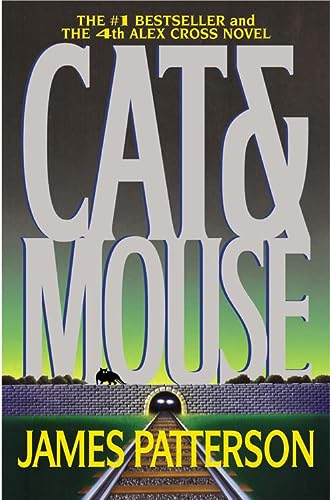 In this New York Times bestseller, two killers-one operating in America, one in Europe-believe Alex Cross is the only worthy opponent in the deadly game each has planned.
Gary Soneji, a dying prison escapee, is looking for revenge on Cross, while another insane killer is pursued by Thomas Augustine Pierce-a brilliant and relentless detective who may even be better than Cross. As the bodies pile up, and Cross is nearly murdered in his own home, the game of cat and mouse leads to one final trap. . .
The body count is high, the tension the highest, and the two killers on the loose are watching every move their pursuers make. Who is the cat, and who is the mouse? What and where is the final trap? And who survives?

Alex Cross, the Porsche-driving doctor-detective-profiler-psychologist and single father of two must save his own life as well as the lives of his lover and family in a deadly game of Cat and Mouse. Cross meets up again with his old nemesis Gary Soneji, the ruthless, bloodthirsty megalomaniac from Along Came a Spider. Apparently, Soneji isn't too happy with Cross for putting him away and keeping him out of the violent crime loop for five years, so he's back with a bone to pick and a couple of fish to fry--or innocent bystanders to shoot, stab, or bludgeon. Soneji goes on a commuter killing spree in hopes of luring Cross down a bloody trail that ends at the good detective's own home. Cross is hot on the case and hot for Christine Johnson, his children's babe-a-licious principal who happens to be the widow of George Johnson, one of Soneji's victims. Never mind the coincidence; is Christine a bad-luck charm? Is there another killer? If so, is she or he in cahoots with Soneji? Once again, Patterson delivers a fast-paced, action-packed thriller that's sure to keep the pages flying.

A murderer named Gary Soneji patiently waits in the basement of Alex Cross's home in Washington. He has come to kill Cross and his family. That's just the beginning of the greatest page-turner in years. Two mind-numbing killers -- one operating up and down the East Coast of America, one in Europe -- believe Cross is their only worthy opponent. They dare to ask the ultimate question: Is Alex Cross about to die? You won't put CAT & MOUSE down until the question is answered.