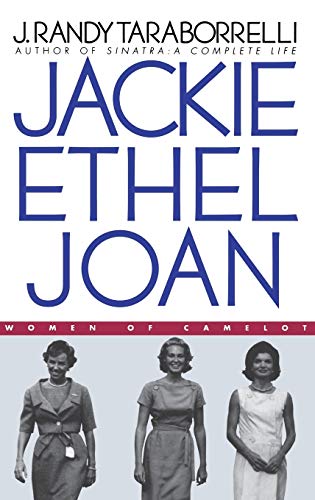 New York Times bestselling biographer J. Randy Taraborrelli provides an intimate and in depth look into the lives of the Kennedy wives, Jackie, Ethel, and Joan.

Over the years there have been many books published about the Kennedy family, individually and collectively. But only this book provides a powerful and detailed look at the complex relationships shared between the three women who were not born Kennedy but who married into the family: Jackie Bouvier, Ethel Skakel, and Joan Bennett.

For each of the Kennedy wives, the Camelot years provided an entirely different experience of life lessons. These were the years when Jackie's dreams became reality, but at a hefty price. For Ethel, these were years of frustration where her dreams of being First Lady were dashed and she sank into a deep depression. For Joan, her years as a Kennedy wife were the most confusing of her life, and she is now a recovering alcoholic.

This fascinating story is set against a panorama of explosive American history, as the women cope with Jack's and Bobby's alleged affairs with Marilyn Monroe, their tragic assassinations, and other tragedies and scandals. Whether dealing with their husbands' blatant infidelities, stumping for their many political campaigns, touring the world to promote their family's legacy or raising their children, the Kennedy wives did it all with grace, style, and dignity. In the end, Jackie, Ethel, Joan is a story of redemption and great courage.

What a great idea for a deep-dish tell-all! JFK's lonely, classy wife, Bobby's athletic, competitive wife, and Ted's meek, alcoholic wife, together at last between covers, soothing each other when not fighting like fishwives. Taraborrelli's breathless prose makes you a fly on the wall when formidable mother-in-law Rose Kennedy walks in on Joan commiserating with Ethel about their honeymoons: "I think Bobby was finished before I got into the room!" said Ethel. "Now what are you ladies talking about?" asked Rose. Jackie, who was present, cooed, "Oh, we were just saying how well Bobby sleeps at night." "He gets that from me," said Rose.

Ethel should never have been so catty when gentle, simple Joan joined the clan: "Goodbye wine and cheese," hissed Ethel. "Hello macaroni and cheese." And she shouldn't have mocked Jackie for being unable to compete in touch football--with the Kennedys, it was more like "claw, scratch and bite" football. And what about when she rubbed it in that she and Bobby were closer than Jackie and Jack? After all, when Lee Remick phoned Ethel to say "You're on the way out," and Ethel replied that Bobby was home in bed, Bobby was in fact (says Taraborrelli) in bed with Lee Remick.

You may have heard that JFK's dad, Joe Kennedy, offered Jackie $1 million not to divorce JFK, but did you hear Jackie's alleged reply? "The price goes up to $20 million if Jack brings home any venereal diseases." Did Ethel betray Jackie's discontent to Joe--and then go ballistic when Joe only gave Ethel $500,000? You'd think Joan would be the clinker in the group, like Zeppo Marx. She was a bit dim, but should Ted have put her down as dumb? He's the one who showed up soused with a prostitute for dinner with the king and queen of Belgium, whose priceless antique couch Ted's date ruined by wetting it.

Who knows how historians will judge this book, but it sure does a great job of making history into a Jackie Collins novel. --Tim Appelo

J. Randy Taraborrelli is a respected journalist, a recognizable entertainment personality, and in-demand guest on many television programs including Today, Good Morning America, The Early Show, Entertainment Tonight, and CNN Headline News. He is the bestselling author of thirteen books.